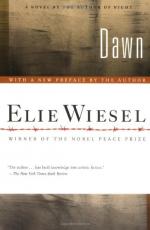 Elie Wiesel
This Study Guide consists of approximately 41 pages of chapter summaries, quotes, character analysis, themes, and more - everything you need to sharpen your knowledge of Dawn.

The novel takes place in Palestine over the course of a night. It is right after World War II, and Palestine is under the British occupation. The central character, Elisha is an eighteen-year-old young man, going on nineteen. This is his story as he traces how he comes to kill a man.

Elisha is a member of the Movement, a Jewish terrorist group, whose purpose is to drive out the English forces from Palestine by any means necessary. Elisha was incarcerated in Auschwitz and then Buchenwald during the war and lost both of his parents in the process. When the Americans freed him, he went to France, which granted him asylum. He was preparing to enroll in Sorbonne to study philosophy when he meets Gad, a member of the Movement, in Paris. Gad came to visit him and talks fervently about realizing the age-old dream of an independent nation for the Jewish people and asks Elisha to join the Movement, which is in need of new recruits like him. Elisha was searching for the meaning of life and the nature of man in light of his experience. To him, Gad seemed like Meshulah, the mysterious messenger of fate. Convinced that Gad showed up at that moment to show him the way, he agreed to join up and moved to Palestine.

Soon after arriving in Palestine, Elisha undergoes intensive terrorist training for six weeks. He is also indoctrinated into the Movement's ideology, which is to get the English out by any means necessary. Elisha goes on a few missions, but it's always in a group. He may have killed someone, but it is not clear because he's never had to face a person and kill point-blank. That's about to change.

The Old Man, the leader of the Movement, is fed up with the British power in Palestine, which just sentenced David ben Moshe to death by hanging. Ben Moshe's sentence makes it the tenth death sentence on a member of the Movement. David ben Moshe was captured about a month earlier during a raid led by Gad. It was a simple mission to procure arms from an English base. The raid goes awry due to a wounded English sentry's courage, and resulted in the death of Dan, another member, and the capture of David. The Old Man declared that from now on, one Englishman will die for every terrorist executed. To drive home his point, he ordered the kidnapping of an Englishman, preferably an officer. The unfortunate victim is Captain John Dawson, who is taken while he is taking a walk alone at night.

The kidnapping turns the spotlight on Palestine, making David ben Moshe's case an international incident. Some, including John Dawson's mother, plead for clemency for David so that John Dawson can be spared, but the British Cabinet refuses, afraid of showing weakness to would-be nationalists in other parts of the Empire. The Movement makes the same stand as the British Cabinet feeling they can't back down or they'll lose credibility, and their future actions will draw only contempt.

Elisha learns that he is the one selected to execute John Dawson. This is his first face-to-face killing. As he waits for dawn, the time the execution will take place, many thoughts plague him. He struggles with the thought of killing someone, who hasn't done anything to him. He is visited by all the people he has known, who are now dead. One of them even looks like the boy he used to be before the war tore everything apart. He looks for answers from his fellow members, but they only try to comfort him by telling him that it's war.

With only an hour to dawn, Elisha finally goes to meet John Dawson. He is a handsome, distinguished man. When realizing that Elisha is about his own son's age, he expresses pity for this boy, who has to face such choices, which his son never had to experience. Elisha wants to hate the man, but he can't. He doesn't want to kill a man in cold blood and wants to find something in John to hate, but it's hard. John is not craven or evil, just a noble man who is bravely facing his untenable fate. He asks Elisha to give his letter to his son, and Elisha promises to mail it the same day. John wants to tell him a story, but he doesn't get the chance. Elisha shoots him, and Elisha's name is the last word on the dead man's lips.

When the darkness falls away, everything has changed. Darkness always carries a face, and it's of death. Elisha realizes that there's a face in the darkness, and it is his own.

More summaries and resources for teaching or studying Dawn.