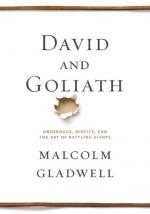 David and Goliath: Underdogs, Misfits, and the Art of Battling Giants Summary & Study Guide includes comprehensive information and analysis to help you understand the book. This study guide contains the following sections:

This detailed literature summary also contains Topics for Discussion on David and Goliath: Underdogs, Misfits, and the Art of Battling Giants by Malcolm Gladwell.

“David and Goliath” by Malcolm Gladwell is a non-fiction book that provides statistical and scientific evidence, anecdotal proof and theory about the weak versus the strong – David versus Goliath – and how the underdog oftentimes astonishes everyone by defeating the giant. Research indicates that small countries can defeat large countries militaristically if the large country is too resource heavy. The weaker opposition does not have as many resources as the stronger side and therefore has to devise unconventional ways to be on the path to victory. Such a method is often the winning strategy due to the element of surprise and the stronger side’s narrow and limited approach to the battle. Lawrence of Arabia and his 200 ragtag Bedouin defeated 1,200 well-armed and well-trained Turkish soldiers because of an unexpected strategy.

The author tells the story of a father who became the coach of his young daughter’s basketball team. The father knew little about basketball and the girls on his team were untalented and inexperienced. In order to even the playing field, the coach had to think outside the box. The father-coach connected with one element of basketball – winning. It was his nature to always want to win. He decided the best way to keep the better trained and more talented opposition from winning was to not let them have the ball. He therefore taught his girls to be aggressive defensively which got them to the finals.

French Impressionist painters from the late 19th century were faced with changing their painting style so their works could be hung in the Salon the elite exhibit for new painters. Art critics and patrons didn’t favor the Impressionists style, and therefore the works of the now famous artists were kept out of the important showing. The painters had two choices: change their style or open their own exhibit. Thankfully for the world of art at large, the artists decided to show their art in their own venue and not abandon their artistic style. Had they conformed to the opinions of the critics of the day, their priceless paintings would not be hanging in all the major museums around the world today.

Part of being a winner as an adult is oftentimes due to various forms of hardship during childhood. Losing a parent to either death or abandonment has a devastating impact on a child. But a child learns to fill that void in different ways – sometimes good and sometimes bad. The child who makes lemonade out of lemons and learns from the pain of not having a parent emerges from childhood stronger and wiser and most importantly he learns how to survive and is ready to do battle as an adult.

The author places much focus on dyslexic individuals who have a rough time learning because of their reading disability. They don’t see words backwards; they see the words plainly but take an inordinate amount of time to connect meaning to the word. The condition was caused by misfiring neurons during fetal development. Just like the child who was abandoned, the dyslexic child has a rough time in school and with his peers. If can’t read like a “normal” child and, therefore, must learn how to devise workarounds. As he develops and hones that skill, he can often surpass individuals who were great readers as kids. Many famous and successful people are dyslexic and recognize that their disability and the suffering it caused helped to make them who they are.

Those who have power and mistreat the underdog may be doing so at their own risk.

David and Goliath: Underdogs, Misfits, and the Art of Battling Giants from BookRags. (c)2022 BookRags, Inc. All rights reserved.