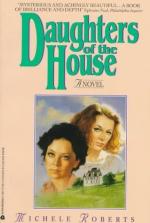 Daughters of the House - Chapter 3, The Doorbell Summary & Analysis

Michele (B.) Roberts
This Study Guide consists of approximately 86 pages of chapter summaries, quotes, character analysis, themes, and more - everything you need to sharpen your knowledge of Daughters of the House.

Thérèse arrives by bus. She has not left the monastery for twenty years, and she feels vulnerable and uncomfortable in public. Thérèse is aware that the other passengers staring at her. In town, Thérèse notices the graveyard where her father, mother, and aunt are buried. In a corner is Henri Taillé's grave, which recently has been opened. Vandals have drawn swastikas on the tombs. Thérèse has read about this in the news, and she decides to look at it later. When she reaches the house, the lights are off. As Thérèse approaches the door, it opens and she is greeted by Léonie, who stares angrily.

(read more from the Chapter 3, The Doorbell Summary)