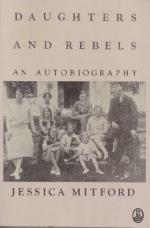 Daughters and Rebels: An Autobiography Summary & Study Guide includes comprehensive information and analysis to help you understand the book. This study guide contains the following sections:

This detailed literature summary also contains Topics for Discussion and a Free Quiz on Daughters and Rebels: An Autobiography by Jessica Mitford.

Hons and Rebels by Jessica Mitford is the story of Mitford's upbringing and years of her marriage to Esmond Romilly. Jessica is from a wealthy aristocratic family, with a father who was a member of the House of Lords. Growing up on their country estate with her brother and five sisters was basically like growing up in isolation with no friends but each other. Their estate was totally self-sufficient, complete with a lessons room and a hospital room. Jessica yearned to meet people. She wants to escape the confines of her family and country estate and get out into the world. Jessica establishes her running away savings account at an early age. She thinks that the boredom and monotony will be broken when she becomes a debutant but is disappointed to find she is still confined to the stuffy world she grew up in.

Her family has leanings toward Hitler and Nazism, while her own personal leanings were towards socialism. She learns of her second cousins, Giles and Esmond Romilly's revolt against family and tradition from their publications and feels particularly close to Esmond, with whom she eventually elopes. She runs off to Spain with him, planning to fight against Franco. She uses her running away savings account to help with the expenses. After they marry, they are cut off from any financial support from their families and must work to support themselves. This results in some humorous incidents, like not knowing they had to pay for electricity until they ran up a huge bill.

They eventually decide to move to America, and the last half of the book covers their time there. They use letters of introduction to meet people and take part in a whirlwind of social events in New York and in Washington DC, taking whatever employment they can find to support themselves. They sell silk stockings in Washington and work as a drug store clerk and a busboy in Miami until Esmond borrows money and becomes a partner in the Roma restaurant and bar. Then they both become involved in the management of the bar. They leave there when Esmond decides to enlist in the Canadian Air Force. In spite of all of his rebellion, he feels he must fight against Fascism.

Hons and Rebels is light reading and reads like a novel. The book is humorous and enjoyable reading and well worth the time spent. The style of the author makes the book pleasant reading, even supplying the suspense of having the reader wonder what will happen next in the story.

Daughters and Rebels: An Autobiography from BookRags. (c)2022 BookRags, Inc. All rights reserved.