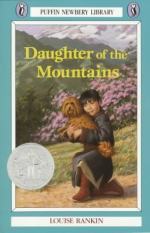 Plot Summary
+Chapters Summary and Analysis
Chapters 1-2, The Gift of a Red-Gold Lhasa Terrier, Adventure! The Beginning of the Prophecy
Chapters 3-4, The Giant Staircase and the Forest, Captured by the Woman at Rhenok
Chapters 5-6, The Ten Traders and Tsu Foo, Protector of the Poor
Chapters 7-8, Lotus Blossom's Plan, Fulfillment of the Prophecy, Good Fortune
Free Quiz
Characters
Objects/Places
Themes
Style
Quotes
Topics for Discussion
Order our Daughter of the Mountains Study Guide

Louise S. Rankin
This Study Guide consists of approximately 23 pages of chapter summaries, quotes, character analysis, themes, and more - everything you need to sharpen your knowledge of Daughter of the Mountains.

Daughter of the Mountains Summary & Study Guide includes comprehensive information and analysis to help you understand the book. This study guide contains the following sections:

This detailed literature summary also contains Topics for Discussion and a Free Quiz on Daughter of the Mountains by Louise S. Rankin.

Daughter of the Mountains is a story about a little Tibetan girl named Momo who had always wanted a red-gold Lhasa Terrier like those owned by Tibetan Buddhist priests. The story begins with Momo's obsession to acquire a Lhasa Terrier for herself and then receiving one tied to a prophecy that the dog will bring adventure and fortune. When the dog, Pempa, is stolen by a trader, Momo pursues him all the way to India, by herself, until she finally tracks down the British woman to whom Pempa was sold. When the woman, Lady Paton, hears Momo's story and sees the bond she has with Pempa, Paton graciously returns Pempa to Momo and showers fortune on her family.

The book contains eight chapters. Chapter one, The Gift of a Red-Gold Lhasa Terrier, introduces Momo and her family, along with Momo's obsession with acquiring a red-gold Lhasa Terrier for herself that had started when she was four years old. The text takes the reader through the next several years, with Momo developing an intense spiritual life built around getting this sort of dog until her prayers are finally answered. But when she has Pempa named, she is given a prophecy by an astrologer, who tells her that Pempa will bring adventure (which in her culture is tied with the notion of peril) and fortune. Chapter two, Adventure! The Beginning of the Prophecy, takes the reader briefly through the next several years of Momo's life as she becomes attached to Pempa and he becomes a daily feature of her life. However, one day, when some traders pass through her town, Pempa is stolen and Momo quickly runs off, convinced that she will be able to find him.

From here, chapter three, The Giant Staircase and the Forest, begins. Readers begin to see a review by the author of all the cultural distinctiveness of Tibet and the many landmarks associated with it. The book gradually transitions into Indian culture in Calcutta, describing landmarks and cultural elements all along the way. Chapter three shows Momo traveling all alone, bound and determined to find her Pempa, until she is captured by a family in whose home Momo stayed in chapter four, Captured by the Woman at Rhenok. She quickly escapes the next day and continues to make her way through the countryside in chapter five, The Ten Traders and Tsu Foo. All along the way, the people Momo meets discourage her from pursuing Pempa, telling her that it is too dangerous or hopeless. But all the while, Momo refuses to listen. She does meet one young girl named Tsu Foo, who is enslaved to her aunt and uncle but who helps her find the traders Momo believes were responsible for taking her dog. When she meets Big Dorje, one of the traders, he refuses to help her.

Chapter six, Protector of the Poor, Momo meets a British man, a very high ranking official and the only Englishman allowed in Tibet, the Lat Sahib. He is extremely gracious to her and gives her the money to travel to Calcutta to find her dog. He then charges Big Dorje with her care. Chapter six takes her on two train rides on her way to Calcutta and describes the cultural transitions in between. At the end of chapter six, Momo is pick-pocketed in the streets of Calcutta. In chapter seven, Lotus Blossom's Plan, she is still able to find her way to the shop where Pempa was sold. She finds out that she probably cannot get him back but she never gives up hope. Eventually the shop owner, Wing Fong, is badgered enough by his daughter, Lotus Blossom, to send Momo on his own rickshaw to the Lady Paton's Palace to seek out her dog. In chapter eight, Fulfillment of the Prophecy: Good Fortune, Momo meets the Lady Paton and impresses her with her story so much that Lady Paton graciously returns Pempa to her, reprimands the thief and gives her father a wonderful new job. The story ends with the prophecy fulfilled.