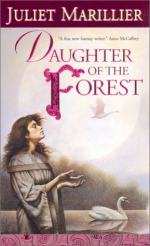 Juliet Marillier
This Study Guide consists of approximately 35 pages of chapter summaries, quotes, character analysis, themes, and more - everything you need to sharpen your knowledge of Daughter of the Forest.

Daughter of the Forest Summary & Study Guide includes comprehensive information and analysis to help you understand the book. This study guide contains the following sections:

This detailed literature summary also contains Topics for Discussion and a Free Quiz on Daughter of the Forest by Juliet Marillier.

Daughter of the Forest is the first book in the Sevenwaters Trilogy by Juliet Marillier. In this novel, Sorcha is the seventh child of Lord Colum, an Irish warlord. Sorcha's mother died shortly after her birth, leaving her in the hands of capable servants and her older brothers. As she and her brothers grow, they become very close. When their father marries a new woman who Sorcha and her brothers come to realize is an evil witch, they ban together to rid their lives of this threat, only to cause this powerful witch to lay a curse on the brothers that Sorcha alone can reverse. Daughter of the Forest is a novel about love of family and the strength of character that allows Sorcha to break the curse that holds the lives of her beloved brothers.

Sorcha is something of a wild child, having been raised by her six brothers and a handful of well-meaning servants. Sorcha's father, an Irish warlord, is constantly on the move, running campaigns against foreign threats and caring for his people. In the care of her brothers, Sorcha learns the secrets of the forest, using them to heal her people. Sorcha also learns at the feet of Father Brien, a kind Christian priest who lives a hermit's life near her home.

When Sorcha is still young, she finds herself pulled into a plot by her brother, Finbar, to help a Briton taken prisoner by her father's men escape. Sorcha wants to help, but Finbar limits her involvement to making a sleeping draft for the prisoner's guards, afraid that any more involvement on her part will cause her irreparable harm. However, weeks after the prisoner's escape, Sorcha is called by Father Brien to help heal the prisoner, whose physical wounds are healing but whose mental wounds continue to fester.

Sorcha stays with Father Brien for weeks, caring for the Briton, whose name she learns is Simon. Simon is terribly wounded, but his deepest fears are that he might have broken under torture and given information to Sorcha's father. Sorcha does the best she can to help Simon, but soon her brothers return for her and force her to go home, causing her to leave Simon alone. At home, Sorcha discovers that her father has met a woman he plans to marry.

As Sorcha and her family prepare for the wedding, Sorcha learns that Simon has disappeared. However, Sorcha is now focused on her new stepmother, a woman who appears to have nothing but malice in her heart. Shortly after the wedding, Sorcha and her brothers gather to perform a Druid ceremony they hope will rid their family of this malicious force, but their stepmother arrives during the ceremony and curses the boys, turning them all into swans.

Sorcha goes to Father Brien, but instead runs into the Lady of the Forest who tells her that only she can reverse the curse, but she must remain silent and she must make a shirt for each brother made out of a plant she knows as starwort. Sorcha gathers a few necessities and finds a place where she can hide in the forest until she can finish the shirts.

Sorcha is all alone in the forest for nearly two years, visited only twice a year by her brothers. Shortly before one of these visits, Sorcha's hiding place is discovered by three men from a nearby village. Sorcha is brutally attacked. A short time later, the Lady of the Forest comes to Sorcha and tells her she must move on. Sorcha takes a boat down the river and finds herself caught in a storm. A Briton sees Sorcha and saves her from near drowning. When the Briton searches Sorcha's bag and finds a carving Simon left for her, he becomes convinced that she knows something of his brother and he decides to take her back to Britain with him.

Sorcha spends a year in the home of Lord Hugh of Harrowfield, allowed to continue working on the shirts without question. However, many in the household are suspicious of Sorcha because of her nationality. Sorcha finds herself in constant danger, the source of which is often Lord Hugh's uncle, Richard of Northwoods. To protect Sorcha, Lord Hugh marries her, but then he leaves to return to Ireland in search of his brother, Simon. In his absence, Sorcha is accused by Lord Richard of infidelity, treason, and witchcraft. After her trial, Richard attempts to burn Sorcha at the stake. Sorcha reverses the curse on her brothers and is rescued by her beloved, whom she must leave but is later reunited with.

More summaries and resources for teaching or studying Daughter of the Forest.

Daughter of the Forest from BookRags. (c)2022 BookRags, Inc. All rights reserved.