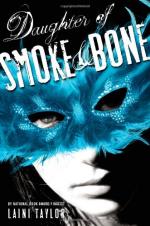 Daughter of Smoke And Bone Topics for Discussion

Explain the sense in which Karou lives a double life in the beginning of the book. Describe her two roles, and the ways in which she tries to reconcile them.

How are Madrigal and Karou related to one another? Use examples from the book to illustrate your points. Further, do not immediately start with the relationship revealed at the end of the book, but begin where Madrigal is introduced.

Why does Karou leave Akiva? Why doesn't she kill Akiva?

Explain why Madrigal did not want to marry Thiago and how her resistance plays into the plot.

What are the five denomination of wishes, from lowest to highest? What are wishes used for in the book?

Explain the social background conflict in which Karou is caught up between the chimaera and the seraphim...

Daughter of Smoke And Bone from BookRags. (c)2023 BookRags, Inc. All rights reserved.