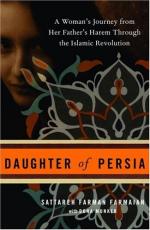 Daughter of Persia: A Woman's Journey from Her Father's Harem Through the Islamic Revolution Setting & Symbolism

Sattareh Farmanfarmaian
This Study Guide consists of approximately 35 pages of chapter summaries, quotes, character analysis, themes, and more - everything you need to sharpen your knowledge of Daughter of Persia.

Satti was born in Shiraz, the ancient heart of the Persian empire, a region known for its roses, wine, and poets. However, as an infant she was moved to Tehran, where she spent most of her life.

The Family Compound on Sepah Avenue in Tehran

Satti spend an idyllic childhood in the family compound her father built on Sepah Avenue in Tehran. There, her father built a large house for himself, run by his housekeeper. Surrounding the courtyard, he built houses for three of his younger wives. The tranquil, beautiful walled compound containing 1,000 people was like a small city, with carpenter shops, a dairy, greenhouse, blacksmith shop, pools, gardens, and many servants. Despite this luxury, the compound has no telephone or electricity outside Shazdeh's home, and no central heat or hot water.

Shazdeh's summer home was in the cool mountains of Reswanieh, where he takes his...

More summaries and resources for teaching or studying Daughter of Persia: A Woman's Journey from Her Father's Harem Through the Islamic Revolution.

Daughter of Persia: A Woman's Journey from Her Father's Harem Through the Islamic Revolution from BookRags. (c)2022 BookRags, Inc. All rights reserved.