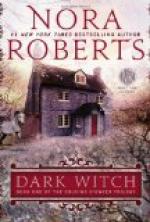 This Study Guide consists of approximately 54 pages of chapter summaries, quotes, character analysis, themes, and more - everything you need to sharpen your knowledge of Dark Witch.

This detailed literature summary also contains Quotes and a Free Quiz on Dark Witch by .

The Dark Witch by Nora Roberts is the story of an 800-year old magical curse and the three dark witches who join together to break the spell and defeat evil once and for all.

In 2013, American-born Iona Sheehan moves to County Mayo, Ireland in search of her family. For her entire life, Iona has felt like she didn’t belong, and as she aged, her grandmother confided in her that this is because she is a witch. Iona’s grandmother convinces Iona that she has been chosen to embrace the magic, return to Ireland, and defeat the evil sorcerer that has been hunting her family for generations. When Iona moves to Ireland, she immediately connects with her two cousins, Branna and Connor O’Dwyer, moves in with them, and begins taking magic lessons to embrace her skills.

Branna and Connor are much more familiar with their family history. They know the legend of Sorcha, the dark witch who in 1263 first battled against Cabhan, the evil sorcerer. Cabhan lusted after Sorcha’s body and power, and stalked her with the hopes of stealing her magick. Knowing that she and her children would never be safe while Cabhan still lived, Sorcha concocted a spell to sacrifice herself and protect her children in the hopes that she would destroy Cabhan. She didn’t succeed and died in the process, but she did manage to protect her children. The spell that she cast allowed her magic to be passed on through the generations, until descendants from the three children would return to County Mayo and defeat Cabhan once and for all. With Iona’s move to Ireland, it seems that the three have returned, and their magic is strong enough to challenge Cabhan’s evil pursuit of their power.

When she moves to Ireland, Iona is eager not only to embrace what she truly is – a dark witch – but also to live an independent, “normal” life. Her magical guide is horses – she can communicate with them and understand their thoughts – so she takes a job at a local stable, run by the ruggedly handsome Boyle McGrath. On her first day, Boyle returns to the stable with a new stallion, Alastar, the same name as Sorcha’s youngest daughter’s horse. Iona takes this as a sign that she is meant to be here, and that Alastar is meant to be hers. When she sees Boyle riding the magnificent horse, she immediately falls in love with both of them. Since he needs the help and is a good friend of the O’Dwyers, Boyle hires Iona on the spot. She begins by mucking out stalls. When Boyle sees how easily she seems to communicate with the horses, he soon has her leading guided trails and teaching jumping lessons. Within a few days, Iona feels more at home with her new family, friends, and job, than she ever as.

Despite Iona’s sense of comfort in Ireland, Cabhan is always lurking in the shadows, threatening to overpower her. His stalking begins by calling Iona’s name in the fog, just as he had done with Sorcha, and occasionally surprise attacking her while she is in the woods. He tries to lure Iona away from her friends and family, toward Sorcha’s old cottage, to attack her in the hopes of stealing the power passed down to her from Sorcha’s spell. Every time, however, Iona surprises Cabhan (and even herself) by fighting back with a furious magic, more powerful than even she was aware of. She works hard in her lessons with Branna and soon masters enough spells to keep Cabhan at bay. Branna, Connor, Iona, and their friends know that Cabhan is getting stronger and now is the time that they should attack. Along with Boyle, Finbar Burke – a descendent of Cabhan who has turned away from evil to embrace good – and a stable friend, Meara, the three dark witches create a plan to lure Cabhan into the woods where they will join the forces of their magic in the hopes of overpowering him. They wait until the winter solstice to act, but when they do, Cabhan transports them all back in time, when his magic was at his strongest. Although he is badly wounded during their battle, Cabhan manages to escape. The three dark witches must continue to plan in the hopes that next time, they will defeat Cabhan once and for all.

More summaries and resources for teaching or studying Dark Witch.