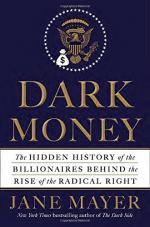 Jane Mayer
This Study Guide consists of approximately 76 pages of chapter summaries, quotes, character analysis, themes, and more - everything you need to sharpen your knowledge of Dark Money.

Seasoned reporter and staff writer of The New Yorker Jane Mayer delivers an in-depth, wide-spanning analysis of the rise of outside money in the political arena, specifically on the right, with Dark Money. Going back almost fifty years, Mayer provides a timeline of the progression of one of the most influential yet most covert movements in American political history. At every turn, Mayer's investigation led her to Charles and David Koch, referred to in the book and in public jointly as the Koch brothers. The Kochs are not the only financiers of the conservative movement, yet they capture the vast majority of Mayer's attention. Presumably, the Kochs represent a convergence of all the efforts of the conservative movement, from weaponizing philanthropic efforts, to investing in academia, to buying state legislatures. The brothers have used their million-dollar fortunes to further own self-interest on the political stage. Mayer uses Dark Money to exemplify the Kochs as the epitome of what is wrong with the current political system; dark, outside money is corrupting American politics, and though the corruption has been taking place for decades, it has not been publicized until now.

Mayer has divided her investigation into the rise of the far right into three sections. The first section, titled "Weaponizing Philanthropy: The War of Ideas, 1970-2008" covers the longest span of time of the three sections (25). The first three chapters detail the corporate and political endeavors of four of the largest families who helped lay the foundation for the modern far-right conservative movement: the Kochs, the Scaifes, the Olins, and the Bradleys. These chapters are the only in which Mayer dedicates background information of the main donors and their families. Equipped with an unrealistic fear of losing their fortunes, these wealthy families used their checkbooks to wage a war of ideas, with the long-term goal of shifting American political discourse as far right as possible. This war was fought using philanthropic organizations as weapons, as the title of the first section suggests. As a way to take advantage of tax breaks for donations given to philanthropic organizations, the families established their own pseudo-philanthropic organizations ingrained with their own far-right, free-market theories. Mayer chooses to focus on these families because of the precedent each one set for the conservative movement and the paths they paved for future wealthy donors. Richard Mellon Scaife and his family perfected the art of weaponizing think tanks to achieve political initiatives. The Olins and the Bradleys created a way to cement far-right ideologies into the next generation of scholars. Finally, Charles and David Koch converged these two strategies among others to launch a full-scale conservative movement, to which Mayer has dedicated the remaining two sections of her book.

Mayer's second section, titled "Secret Sponsors: Covert Operations, 2009-2010" dedicates almost as many pages to one year as the first section dedicates to thirty-eight years (157). Undoubtedly, this speaks to the importance of this year along the timeline of the conservative movement, but it also speaks to how involved those in the Kochs' donor network were during this crucial year. From the Tea Party Movement, to the anti-climate change science crusade, to the Citizens United decision, and the 2010 midterm elections, this was undoubtedly one of the busiest and most successful years for the conservative movement. The long-spanning section makes it easy for the reader to forget that Mayer is focusing primarily on one year. However, the fact that so many aspects of the political realm- grassroots movements, the judiciary, and the congress - were being influenced by far-right operatives made it hard for average people and political analysts alike to track the source of the funding of these operations. At the heart of the spending, though, as Mayer's investigation proves, was the Koch brothers and their extensive network of wealthy corporate donors.

Mayer's third and final section, titled "Privatizing Politics: Total Combat, 2011-2014," briefly describes the spoils enjoyed after the pivotal 2009-2010 political year before examining the decline of the conservative movement and the subsequent revival its image received (269). Because of how fresh many of the events in this section are, this section reads as a recap of modern political history. Many of the events described in this section still receive their fair share of air time on major news networks, such as initiatives pushed by the remnants of the Tea Party leaders in Congress, American's call for a presidential candidate outside of the political system such as Donald Trump, and the long-lasting debate over Obamacare. To finalize the book, Mayer shifts her focus from exclusively centered on the conservative movement to identifying the wider-reaching implications of the movement on the political system and the electorate. Wealthy far-right operatives had the foresight to know they needed to launch an all-encompassing assault aimed at shifting the existing political establishment. As Mayer's investigation proves, this assault was successful; by 2015, she deems that any hope of campaign finance reform appeared "hopeless" (374). The previous two sections have been dedicated to the process of building an infrastructure that would allow wealthy corporate interests to covertly assume control of political power. The final section weaves these efforts together to identify what Mayer believes are the implications of the well-financed, far-right conservative movement.

More summaries and resources for teaching or studying Dark Money.