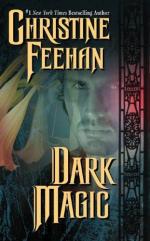 Christine Feehan
This Study Guide consists of approximately 32 pages of chapter summaries, quotes, character analysis, themes, and more - everything you need to sharpen your knowledge of Dark Magic.

This detailed literature summary also contains Topics for Discussion and a Free Quiz on Dark Magic by Christine Feehan.

Dark Magic is the story of Savannah Dubrinski, a world famous magician, and her struggle to find her place in a world of vampires and beings called Carpathians. A powerful being, Gregori the Dark One, has claimed Savannah as his soul mate. Savannah struggles with her intense feelings for Gregori and her fear that she may loose herself completely if she allows herself to love him.

Savannah Dubrinski is the daughter of Prince Mikhail, the leader of the Carpathians. Carpathians are ancient beings that have the power and strength of vampires but don't hunt and kill humans. Vampires are Carpathian males that have lived alone without soul mates for long enough that they choose the thrill of killing people rather than death. Once a Carpathian chooses to become a vampire, he is hunted down by Carpathians charged with protecting their people and killed.

Savannah left her homeland and traveled the world as an illusionist after the most powerful Carpathian male, Gregori, claimed Savannah as his soul mate. Gregori has held off as long as he can and knows that he can no longer choose self destruction, but will become a killer if he doesn't bond with Savannah soon in the mating ritual that happens between life mates. Gregori, who is centuries old, gave Savannah, who is in her early twenties, five years when she asked him for a little more time.

Gregori finds Savannah, and she is attacked by a vampire before Gregori can get to her. Gregori kills the vampire easily and takes Savannah back to his home. Savannah is scared and tries to tell Gregori that she doesn't want him, but she is not strong enough to resist him. Savannah wants Gregori even though she is afraid of him, and soon she agrees to be his lifemate.

Savannah has been afraid that Gregori doesn't love her, but she is able to slip into his mind, as the Carpathians can do, and read his thoughts without him noticing. She finds that Gregori truly loves her and wants her to love him but is afraid that she won't. Knowing this, Savannah begins to open up to Gregori and soon finds that she does love him.

Gregori and Savannah go to New Orleans and find themselves in the middle of a plot by a very powerful vampire to kill Carpathians using human hunters. Gregori and Savannah track the vampire to his lair, where Gregori does battle with the creature, nearly killing himself. A human friend is called to them by Savannah, and he takes them to a place to heal. Savannah and Gregori try to begin their life together, wondering what will await them.