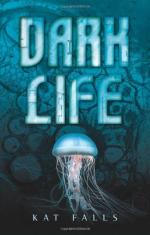 Kat Falls
This Study Guide consists of approximately 71 pages of chapter summaries, quotes, character analysis, themes, and more - everything you need to sharpen your knowledge of Dark Life.

Discuss the theme of identity in this story. Who is having an identity crisis and why? Is anyone ashamed of themselves, or having a hard time accepting who they are? What do characters learn about themselves in this story?

How is the setting of this story similar to the Wild West? Why is this significant to the story being told? In what ways are the themes and ideas found in it similar to those of a Western? What atmosphere does this create? What does it say about Benthic Territory and its people?

Discuss the representation of law and order in this story. What is justice...