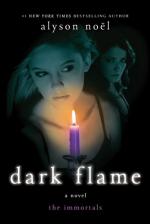 This detailed literature summary also contains Topics for Discussion and a Free Quiz on Dark Flame by Alyson Noël.

Dark Flame is the fourth installment in The Immortals series by Alyson Noel. In this novel, Ever finds herself unhappily bonded to her enemy, Roman. Ever tries several times to break this bond until she finally realizes that the bond is not magic gone wrong but her own darker side made more powerful by her own obsession with obtaining the antidote she needs to repair the damage another antidote did to her soul mate, Damen. Dark Flame is not only another intense novel filled with immortal characters, but a lesson in the battle between light and dark that takes place in everyone.

Ever tells Haven that she has made her immortal to save her life. Haven does not get angry as Ever expected, but is excited by the idea that she will now be better and brighter than she has been in the past. Ever is concerned by Haven's reaction, especially when she turns on Ever and Damen when they attempt to ration her consumption of the elixir. Ever is even more concerned when Haven turns to Roman in her desire to embrace every aspect of immortality.

Ever runs into Jude and discovers that his arm is in a sling after their last encounter. Still convinced that Jude is one of Roman's rebels, she attempts to prove his immortality by slicing his arm. However, Jude is not immortal and the wound requires a trip to the emergency room. Now that Ever can trust Jude again, she turns to him in a search for help in breaking a bond she accidentally created between herself and Roman.

Ever finds herself increasingly attracted to Roman. There is a dark monster inside of Ever that comes to life every time Roman comes near her, causing her to find it increasingly impossible to control her own actions. This monster was created when Ever performed a magic spell attempting to force Roman to give her that antidote that will allow she and Damen to touch again. Instead, Ever has bonded herself to Roman and cannot control the increasingly demanding monster.

After a particularly unpleasant episode with Roman, Ever finds herself standing at the bridge in Summerland where the dead cross over. Ever wonders what would happen if she attempted to cross over. Jude appears and Ever finds herself confessing all to him, including her immortality and her bond to Roman. Jude promises to help. However, it is Ava who finally gives Ever the answers she really needs. Ava teaches Ever how to let go of the darkness that is fueling the bond between she and Roman.

Ever goes to seek answers in her desire to get the antidote from Roman and learns about his terrible childhood. Ever realizes that Roman has never been loved and she decides to offer him her unconditional love in one last attempt to get the antidote. Roman shows her the antidote and promises to give it to her if she will show him where Drina is. Unfortunately, Jude walks in on a scene he does not understand and kills Roman in a misguided attempt to protect Ever. By doing this, Jude removes Evers' last chance to get the antidote she needs.