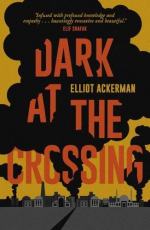 Dark at the Crossing Summary & Study Guide includes comprehensive information and analysis to help you understand the book. This study guide contains the following sections:

This detailed literature summary also contains Quotes and a Free Quiz on Dark at the Crossing by Elliot Ackerman.

The following version of this book was used to create the guide: Ackerman, Elliot. Dark at the Crossing. Vintage Books, 2017.

The novel is in six books with one to six chapters in each. The third person narrator speaks from Haris Abadi’s perspective throughout most of the novel and sometimes incorporates flashbacks and dreams.

At the start of the novel, Haris had recently arrived in Turkey for his purpose: crossing the border to fight with the Free Army. A brigade, Saladin1984, had recruited him over email. However, the officers refused to let him cross.

Meanwhile, Haris had a flashback to his life in Michigan with his sister, Samia. Haris had been born in Iraq, and when he was a child his mother died giving birth to Samia. His father worked a lot and eventually abandoned his kids. Different aunts and uncles took care of Haris and Samia during different periods. Eventually, Haris worked as a translator for the Americans in Iraq to save up enough money to move Samia and himself to Michigan.

Haris sat at a cafe in Turkey. A young, wounded man named Saied and an older man named Athid approached him and what he was in Turkey for, and he talked about his desire to fight with the Free Army. Athid eventually offered to help him cross the border. Two days later, Athid took him to cross. They went through underground tunnels. However, eventually, Athid leapt out of the tunnel, and the two Turkish officers tazered Haris and stole his money, map, and backpack. Haris saw them pay Saied.

The next day, Haris lay on the ground. He thought back to his time in Michigan and when he felt upset because Samia’s Emirati boyfriend proposed to her and asked her to move back to Dubai with him.

It was about to rain, and Jamil, the leader of a group of refugee boys, gave Haris shelter. Amir, a man from a research institute, arrived and offered Haris work since he was an American fluent in Arabic.

Haris thought back to his translation work for the Americans in Iraq. He had worked with an officer named Jim. He remembered when he had to translate for Jim who tried to get a mother to tell him where her father, a suspected bombmaker, was hiding. Jim had nearly broken the arm of her son, Kareem. Haris felt bad for the family.

Amir asked Haris to join him for dinner with his wife, Daphne, and her friend. That night, Haris saw that Daphne slept with her light on and her door slightly open. Her back was scarred.

Haris thought back to when Jim had called war “home” (79). It was Jim’s thirty-third birthday, and he looked very aged. He said that the war had lost meaning for him and that he did not care that the grandfather whom they had arrested had actually been innocent.

The next day, Amir suggested that Haris spend the day with Daphne at the hospital. The hospital treated Syrian patients only in the poorly-kept, uncleaned basement. Saied was a patient there. Haris asked Daphne to help him try to get his property back from Saied. When they went to the room, Saied said that he had used Haris’ money to pay to get himself to the hospital. He also confessed that he was Saladin1984. He explained that he had previously been part of the Free Army in Syria, but the Daesh, including Amir, one of the leaders, came to the warehouse he was at and killed almost everyone except for Saied who was needed for his technical skills. When there was a bombing at the warehouse, Athid had accused Saied of planning it and cut off his fingers. The bombing had wounded Saied and killed his wife. Haris still wanted to cross the border, and Daphne said she wanted to cross, too. She agreed that she would pay five thousand dollars if Saied arranged for Haris and her to cross.

At the apartment, Daphne showed Haris journals that she wrote in with kindergarten lessons for her daughter in the future. When there was the civil war in Syria, she and some other mothers had built a kindergarten, which her daughter, Kifa, had attended.

Haris explained to Daphne that he felt guilty for his accidental role in the death of his friend, Jim. Then Daphne and Haris slept together, and she turned off the light. The next day, Amir explained to Haris that when he had lived in Aleppo, he had previously been a supporter of the Free Army and let it use the bottom floor of his apartment, but without telling him, it had stored bombs there, and eventually they exploded when Daphne and Kifa were home. Daphne was seriously wounded, so Amir urgently had to bring her to the hospital in Antep. He left Kifa’s dead body in the rubble.

Daphne told Haris and Amir that Saied had died. She had his phone. Later, Haris used the phone to email Athid, pretending that he was Saied, and offered to pay for help with crossing the border. Athid said to meet up at Kilis regional headquarters. Then Amir, Daphne, and Haris drove to Jamil, who knew how to get to the regional headquarters. At the inn there, Athid offered to help Daphne, Haris, and Jamil cross. After Jamil told Athid that he wanted to fight, Athid encouraged him to fight with the Daesh.

They rode in a truck with other people, too, including a farmer and his family. He gave his daughter a packet of seeds, which the family would need for the year. She kept them in her dress pocket. Athid got off at Azaz. Later, officers stopped the truck near a schoolhouse. They had everyone get out and said that anyone who did not support the regime should step forward. Daphne, Haris, and the group thought that the officers must be from the regime. Only Jamil stepped forward. Haris almost did, but he did not want to betray Daphne. Then the officers shot the group; they were Daesh.

As Haris fell, he grabbed hold of Daphne’s hand again. He saw that girl still had seeds in her dress pocket. He thought that the farmer’s family was lucky because the three of them had never felt the pain of separation, which Daphne and Amir had experienced from Kifa. He imagined that the seeds would grow and that the shoots would encompass their family, and that barley would grow. He tried to stay alive long enough to see the sunrise.

Dark at the Crossing from BookRags. (c)2022 BookRags, Inc. All rights reserved.