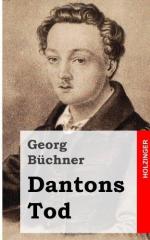 Danton's Death by Georg Buchner is the story of the last days of George Danton who is a leader of one of the sects of revolutionaries during the French Revolution. Another leader of the Revolution, Robespierre, is Danton's rival. Although the two men are ostensibly on the same side - that is, against the monarchy - they are rivals.

Danton is a libertarian who hopes to bring liberty to the French people and allow them to enjoy their lives. Danton has led his followers in battles and established the Revolutionary Tribune which is a panel that sends enemies of the Revolution to their deaths. However, Danton has guilt about the brutality of the tribune and wants to achieve victory with as little bloodshed as possible. Robespierre has a completely different approach and feels adamant that his political enemies and anyone who stands in his way need to be executed. He has come to use the guillotine on a daily basis to eradicate those who he considers enemies of the Revolution and those he judges to be without virtue.

The two revolutionaries are on a collision course of ideology and methodology. Danton is growing weary of the fighting and his guilt over his part in the violence is weighing upon him. As he grapples with the protracted war and an elusive victory, Danton begins to cede his position especially when rumors begin to swirl that he will be arrested. Robespierre, who sees himself as the preeminent revolutionary leader and may aspire to even higher office, sees Danton as a threat and turns many of his followers against him. He convinces them that Danton is an elitist who has betrayed the Republic. The decision is made that Danton and his close associates must be arrested and tried for treason.

The long war has caused the decline of French society. The common people were promised that by joining the Revolution and fighting for liberty their lives would be made better. However, the people are starving and freezing on the streets and their lives are far from improved. They are bitter when they see that the aristocrats are still living lives of opulence and ease. The morals of the people have declined as well with alcoholism and prostitution on the rise.

When it is obvious that Danton is going to be arrested and tried for treason, he sees the writing on the wall. He is fatalistic about his impending end - everyone has to die. Dying young and leaving behind the chaos that life in France has become would be a better option than staying in the fight. Danton feels betrayed and suspects that it was Robespierre who turned the revolutionaries against him and his men.

Danton sees the irony and pathos in that he is being tried by the very tribunal that he established. While imprisoned, Danton and the others discuss the existence of God. Danton, who claims to be an atheist, feels the need to reach out for something bigger than himself. He tries to comfort the others in their final days but the men struggle with their impending executions. Although Danton, who was an inspirational leader and speaker, impresses the tribunal with his words and passion, in the end he and the others are found guilty and sentenced to death.

Danton's wife, Julie, sends a lock of hair to her husband so that he will not be alone when he dies. But she cannot go on without him and drinks poison to end her life. Camille's wife, Lucile, goes mad over the execution of her husband and purposely sentences herself to death by publicly shouting, "Long live the King!"