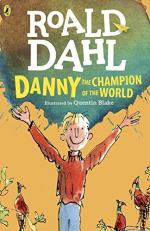 Danny the Champion of the World Summary & Study Guide

Roald Dahl
This Study Guide consists of approximately 31 pages of chapter summaries, quotes, character analysis, themes, and more - everything you need to sharpen your knowledge of Danny the Champion of the World.

Danny the Champion of the World Summary & Study Guide Description

Danny the Champion of the World Summary & Study Guide includes comprehensive information and analysis to help you understand the book. This study guide contains the following sections:

This detailed literature summary also contains Quotes and a Free Quiz on Danny the Champion of the World by Roald Dahl.

“Danny the Champion of the World” is a children’s novel by Roald Dahl which recounts the father-son relationship between Danny and his father as they seek to poach pheasants from the unkind Mr. Hazell. Danny begins the novel by speaking about life up to the age of nine, wherein his mother died and his father became his sole parent. Danny lives with his father in a cozy old gypsy caravan behind the gas and repair station his father owns and runs. Danny loves to help out at the station, and desires to be a mechanic like his father is. Danny also has a very close relationship with his father, and loves his father more than anything in the world.

As Danny grows and pays more attention to the world around him, he discovers that not all grown-ups are kind like his father, such as the wealthy and cruel Mr. Hazell. Even Danny’s own father is not what he believes him to be, as Danny learns his father practices the art of poaching, or stealing, pheasants. Poaching, an act done in the past as a matter of avoiding starvation, is now done for the sport, the thrill, and the art of the process itself. As Danny learns, even Doc Spence, police constable Sergeant Samways, and other important village leaders have done poaching in their lifetimes.

Danny hopes to go poaching with his father, but his father says this will happen when the time comes. When Danny’s father does not return on time from a poaching expedition to Hazell Wood, Danny heads out to find him. He learns his father has broken his ankle and fallen in a trap prepared by the groundskeepers to ward off poachers. Danny helps his father out of the trap pit, and waits up for Doc Spence to arrive. As Danny’s father recovers, he and Danny are unhappy to learn that all of the pheasants owned by Mr. Hazell are due to be killed during Hazell’s annual shooting party. Danny’s father dislikes the senseless killing of birds and animals, so wants to find a way to poach all the pheasants Hazell owns. Danny suggests feeding them raisins laced with sleeping pill powder, making the pheasants easier to poach. Danny’s father agrees.

Danny’s father brings Danny along with him to sneak into the woods and feed the pheasants the sleeping pill raisins. As night falls, the pheasants fall asleep and are very easily poached. This causes Danny’s father to believe they have broken a record for pheasant poaching, and to call Danny the “champion of the world.” The pheasants are dropped off with Reverend and Mrs. Clipstone, who always deliver poached pheasants the day after they are poached to avoid angry owners and policemen.

The next day, as Mrs. Clipstone delivers the pheasants, they awaken and block traffic in front of the station. Mr. Hazell arrives, angry and demanding Sergeant Samways return his pheasants. Samways is not convinced the pheasants belong to Mr. Hazell without evidence. When it is agreed to chase the pheasants away to see which way they fly, they fly in the opposite direction of Hazell Wood. The angry Mr. Hazell heads home, while Doc Spence reveals that six pheasants are still sleeping and can be eaten. The book ends with a message from Roald Dahl in which he encourages parents to be sparky rather than stodgy.

More summaries and resources for teaching or studying Danny the Champion of the World.

Danny the Champion of the World from BookRags. (c)2021 BookRags, Inc. All rights reserved.