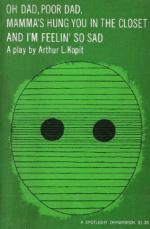 Oh Dad, Poor Dad, Momma's Hung You in the Closet and I'm Feelin' So Sad Characters

The Head Bellboy, holding the rank of lieutenant, is in charge of a platoon of bellboys. He takes issue with Madame Rosepettle's lack of respect for his position when, in the opening scene, she repeatedly insults him as he and his troop escort her, Jonathan, their luggage, and menagerie into their suite in the Port Roy ale hotel. After she reminds him that she is a well- heeled tourist and that she can get him another stripe, he immediately becomes her creature, contrite and meekly obedient. He is the first victim of the overbearing and outlandishly capricious Madame Rosepettle.

Rosalie is a combination baby sitter and nanny for a dozen children left in her charge by wealthy parents who travel about and periodically send her an addition to the tribe. She is two years...