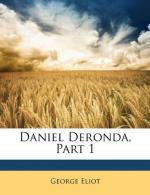 George Eliot
This Study Guide consists of approximately 40 pages of chapter summaries, quotes, character analysis, themes, and more - everything you need to sharpen your knowledge of Daniel Deronda.

Where Gwendolyn is entertaining herself with some light gambling when she sees Daniel for the first time.

Sir Mallinger's place and where Grandcourt stays during his time in the area.

The estate Mrs. Davilow is renting until the family falls on hard times and has to move to a cottage.

The hotel where Mr. Lush settles the woman claiming to be Grandcourt's mistress.

Where Gwendolyn and the others meet for the outing after the archery competition and where she meets the woman who claims to be Grandcourt's mistress.

Grandcourt's estate where Lydia is living with his children.

Where Gwendolyn and Grandcourt live for a period of time after their marriage.

Where Daniel helps find a place for Mordecai and Mirah.

Where Daniel goes to meet his mother.

More summaries and resources for teaching or studying Daniel Deronda.