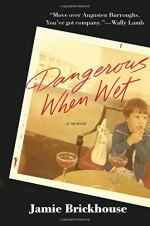 This detailed literature summary also contains Topics for Discussion on Dangerous When Wet by Jamie Brickhouse.

Dangerous When Wet is a memoir of the life of Jamie Brickhouse who is an author and writer who lives in New York City. He is a gay man who lives in Manhattan with his life partner, Michael Hayes.

The story takes the reader back to Brickhouse’s childhood in Beaumont, Texas. His parents were Jean and Earl Brickhouse. Jean had been a young widow with two sons, Jeffery and Ronny, when she met Earl and began dating him. They married soon after and settled in Beaumont. Jean, or Mama Jean as a friend of Jamie’s dubbed her, was the driving force in Jamie’s young life. She was demanding and narrow-minded and was not open to opinions other than her own.

Jamie was well-cared for on a physical level; however, it was a different matter on the emotional and psychological plane. Jamie and Jean hung out together every day until he started school. They would have lunch and go shopping and visit her girlfriends. She often told him that she loved him more than he could ever love her – a comment that stayed with Jamie into adulthood and which contributed to the guilt and shame that he finally had to deal with. When Jamie was about to start kindergarten, Jean told him that the kids will pretend to like him but none of them will love him like she did.

Jamie’s parents liked to party and loved to drink. Alcohol was the focus of the family on many occasions – both formal and casual. They let the precocious five-year-old Jamie sip on alcoholic drinks and when he was fourteen actually ordered them for him. The teenage Jamie had many adult issues facing him. He began drinking heavily while in high school. He also realized that he was gay - something that he repressed for a number of years because Jean hated the gay lifestyle.

Eventually Jamie breaks free of Jean’s physical presence, but her psychological and emotional hold on him lasted a lifetime – as did his addiction to alcohol. Jean begrudgingly came to terms with Jamie’s homosexuality but she was strident in her advice that he get sober – with no recognition that it was she who gave him his first drink.

Jamie was on self-destruct throughout many years after he moved from the family home in conservative Beaumont, Texas, to New York City where anything goes. He lived a dangerous and unsafe lifestyle and could never get enough sex or booze to satisfy an emptiness that was always part of him.

After contracting the HIV virus, blackouts during alcoholic binges and a suicide attempt, he checked into rehab. Although he “recovered” he recognized that he was an alcoholic and that he would have to fight the allure of alcohol the rest of his life. He also admitted that he had to face the real Jamie who existed beneath the layers of repressed emotions, denials and delusion and who had been struggling to be liberated his entire life.