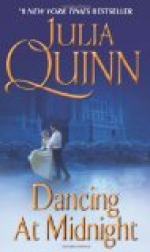 Related Topics
The Duke and I: Bridgertons Book 1
The Duke and I
The Viscount Who Loved Me
An Offer From A Gentleman
To Sir Phillip With Love

Julia Quinn
This Study Guide consists of approximately 22 pages of chapter summaries, quotes, character analysis, themes, and more - everything you need to sharpen your knowledge of Dancing at Midnight.

This detailed literature summary also contains Topics for Discussion on Dancing at Midnight by Julia Quinn.

"Dancing at Midnight" is a romance novel set in the early nineteenth century, and tells the story of the romance between Lady Arabella Blydon and Lord John Blackwood. The novel begins with their meeting in the countryside, on John's estate. Belle has been visiting her cousin, whose husband owns the adjoining property, and does not realize that she was trespassing. The two are immediately drawn to one another and act so antagonistically that it can be hard to tell. John has to fight his attraction to Belle because he thinks it is his fault that a girl got raped during a war he was in as he did not prevent another officer from harming her. This event left him with psychological scars.

Nevertheless, John has to spend time with Belle, as he is old friends with Alex, her cousin Emma's husband, and so gets to know her and starts to fall in love with her. On his property one day, John and Emma are shot at by an unknown assailant, but John protects them. He has also been getting mysterious, anonymous letters. Scared both by what might happen to her and his own negative effect on women, John refuses to see Belle anymore, even after they have had a wonderful time together in several different contexts, and have even kissed several times. However, he tells her that he's hurt women in the past; even though she doesn't believe him, he still won't see her.

As the group moves to London, Belle decides to spread the rumor that she is engaged. John falls under the wrong impression that she is engaged to his brother, and is so relieved when this turns out not to be the case that he begins to court her himself. However, he is still being pursued. He and Belle progress physically to having sex, and then he insists that they be married right away, even though her parents still aren't home from their trip. She agrees, and they throw together a haphazard wedding. Still, someone is pursuing John; with Alex's help, he figures out that it is the rapist, George Spencer. John confronts him, but that doesn't stop George from his pursuit.

After an argument with John over his inability to give himself to her entirely, Belle gets injured in the park and falls deeply ill. John has to rescue her and nurse her back to health; once he has saved a life, he starts to believe that he is worthy of love again. This gives him the courage to trap Spencer at a party. Nevertheless, Spencer takes Belle's mother and then Belle hostage, with a gun. John is only able to save her once Persephone, Belle's chaperone, arrives with a gun, which John uses to save the day.

More summaries and resources for teaching or studying Dancing at Midnight.

Dancing at Midnight from Gale. ©2005-2006 Thomson Gale, a part of the Thomson Corporation. All rights reserved.