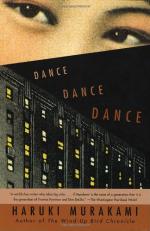 This detailed literature summary also contains Topics for Discussion and a Free Quiz on Dance Dance Dance: A Novel by Haruki Murakami.

"Dance Dance Dance" by Haruki Murakami is a work of fiction. It is a follow up to Murakami's book "The Wild Sheep Chase."

Murakami introduces his protagonist, a writer without a name. It is unclear why the author chose to give the writer no name except perhaps to make him more identifiable as an "everyman." The man is fairly typical. He is 34 years old, divorced, and working as a freelance writer. Like most people his age, the man has had his share of pitfalls. He has suffered from depression and on one occasion, it was so severe that he became a recluse for six months. Although the writer managed to pull himself out of the abyss, there is still a sense of abandonment from his wife and loss of former business, friendships, and romantic relationships.

The writer's background is revealed. He had fallen into a deep depression after getting a divorce and having a friend die mysteriously. A woman abandoned him. The result was a six-month stint in his apartment during which he did not go out during the day. There was some contact from the outside, including letters from his former business partner and his ex-wife - letters that had gone unanswered. The writer's cat died. In the spring, he decided that it was time to return to society.

The story begins with an unnamed protagonist thinking about his stay at the Dolphin Hotel in Sapporo, Japan. The hotel was a dive but the man cannot seem to get it out of his mind. Part of the reason for that was an extended stay with a call girl named whose name he did not know. In fact, he knew almost nothing about her. But now he cannot get the girl out of his mind. It seems as if the girl is calling him from somewhere beyond. It makes no sense but the man has to do something about it.

The trip to Sapporo is only the first step in along list of strange behaviors and occurrences for the writer.

The man encounters the Sheep Man, an otherworldly being that claims everything and everyone in the writer's life is connected. This includes a sullen thirteen year old girl that befriends the man, the girl's parents, two other call girls, a receptionist, and a former classmate from junior high.

Several deaths take place and they, too, are linked. This causes the writer to examine his life and to learn how to live in a world where everything is connected while trying to find his true place.

Much of the story is left open-ended, giving the reader the impression that the story will continue into the author's next novel.