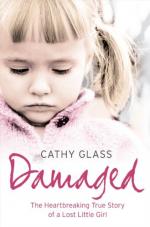 Cathy Glass
This Study Guide consists of approximately 42 pages of chapter summaries, quotes, character analysis, themes, and more - everything you need to sharpen your knowledge of Damaged.

"Damaged" is the story of Cathy Glass and her year-long effort to reach a little girl who was so damaged by abusive parents that her goal turned out to be one that she or any other lay person could never have met. It was wrong that Jodie was placed in a foster home. She was so severely damaged from the abuse that she suffered all her life that she should have been institutionalized instead of being placed in the foster care system. The authorities listed her "at risk" when she was born so they were aware there were problems. As Cathy Glass often wondered, why was she allowed to remain in her parents' home that long?

Cathy had two teenaged kids, Adrian, 16, and Paula, 13. She also had a foster child who had been with her for two years. Fifteen-year-old Lucy was an adopted member of the family and Cathy loved her as her own. Cathy discovered that she had the time and energy to take on another foster child. Her kids were in high school and developing their own lives. Cathy was divorced and agreed to take Jodie into her home despite the fact that she was informed that although Jodie had only been in the system for four months she had already been in five foster homes. Her behavior had been so bad that none of the families could keep her. There were hints that she had abused and was acting out in violence and anger as a result of the treatment she had received. Cathy had had twenty years of success with foster children. She felt confident she could help this little girl. But Cathy had no idea what she and her family would be in for.

Jodie was overweight and unattractive partly from the anger in her face. She kicked the girls and threw porridge at Adrian. She cursed at Cathy and her kids and ordered them to get out of her house. Cathy tried to reach her with understanding, patience, and caring but the connection was lacking. Jodie seemed to disassociate with her surroundings. She was developmentally delayed by several years. Her motor skills were awkward and slow. She said words but the were often not related to each other. She muttered to herself all the time. She would soil herself to get her way and smear her face and the house with her waste. That would be enough for most people to say uncle but Cathy persevered.

Somewhere deep down inside the troubled little girl, she must have sensed that finally she found someone who cared about her. Cathy would get discouraged but she always put Jodie's interest first. She began to trust Cathy and let slip little hints about being abused, severely abused. As time went on and Cathy was able to get more and more out of her, it turned out that her father had sexually abused her for years - perhaps beginning when she was a toddler - and her mother took part in the abuse and covered for her husband. Jodie spoke of uncles and grandfathers who also abused her.

Cathy was appalled and of course reported everything she heard to the Social Services. Bureaucracies are slow-moving entities and although they received strong hints that things were bad in Jodie's household, the situation had been let go literally for years. Cathy kept pushing for Jodie to get help. Finally, a psychologist witnessed firsthand the violence and rage in the little girl and immediately recommended that she be placed in a therapeutic unit where she could have care day and night. Cathy knew that it was the best thing for Jodie but she had mixed feelings. She felt that she failed the little girl although she hadn't at all. It was through Cathy's perseverance and dedication to the little girl that her horrible secrets emerged. Cathy grew to love the little girl despite her horrid behavior. She felt sad because she felt that she had never reached her.

However, Cathy found out she was wrong. Just before she left to live in the therapeutic unit, Jodie wrote a letter to Cathy (actually Paula wrote it for her but Jodie dictated it) in which she thanked Cathy for taking care of her and apologized for all the bad things she did. Once she got better, she wanted to come back. She asked Cathy to be her mother because she didn't want the one she had. Cathy was moved by Jodie's words and gratified that she had reached down in the dark abyss where Jodie existed and brought her some light.

More summaries and resources for teaching or studying Damaged.

Damaged from Gale. ©2005-2006 Thomson Gale, a part of the Thomson Corporation. All rights reserved.