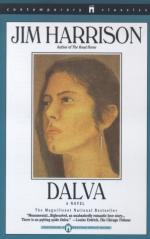 Jim Harrison
This Study Guide consists of approximately 45 pages of chapter summaries, quotes, character analysis, themes, and more - everything you need to sharpen your knowledge of Dalva.

This detailed literature summary also contains Topics for Discussion and a Free Quiz on Dalva by Jim Harrison.

'Dalva' is the story of a woman's journey to find herself amidst the memories of her past and the history of her family. As heir to a fortune and to a family history filled with secrets, Dalva realizes she must give up her own secrets to find peace in her life and to be able to move on.

'Dalva' begins in Santa Monica, California where Dalva, a forty-five year old woman, lives alone. Her life has been a series of unusual relationships with men and a life lived mostly in the past. Her father died early and she was pregnant at fifteen by her half-brother whom she loved. Forced to give up the baby, she became close to her grandfather and uncle, only to have her grandfather also pass away. Left alone, and heir to her grandfather's massive estate, Dalva learns she is also heir to a host of family secrets surrounding her great grandfather, Northridge. As a missionary, Northridge sought to help the Sioux Indians at the end of the nineteenth century but instead found himself fighting the government to help the Sioux maintain their freedom. Continuously beaten down and dealing with the death of his wife, Northridge eventually loses his mind. He becomes a Sioux and helps hide chiefs seeking freedom. In the end, he kills several soldiers and hides the bodies in the root cellar.

Dalva knows of these secrets thanks to a collection of journals written by Northridge. Her lover, Michael, is a history major and seeks to tell the tale of Northridge to the public, so they can gain a better understanding of the Sioux issues. However, Michael's life is riddled with problems as he struggles with sex, drug, and alcohol addictions. Dalva tries to help him but in the end, finds herself tired of his childish antics. Dalva realizes she must find the son she gave up for adoption in order to bring her past and present together. With the help of her family, Dalva locates the mother of her son, only to find her son has been following her for many months. Naomi, her mother, discovers her partner in a nature project, Nelse, is actually Dalva's son. When Dalva goes into the root cellar of the estate, she finds the bodies of the Sioux warriors and the soldiers killed by Northridge, and finds herself able to let go of her own secret past. In the end, she meets Nelse, finds a lover she can respect, and moves forward with her life. Dalva's journey is one of courage, strength, determination, and heritage, and shows that secrets have a tendency to overtake life and that by freeing those secrets, one can move on.

More summaries and resources for teaching or studying Dalva.