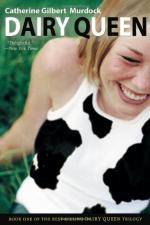 Catherine Gilbert Murdock
This Study Guide consists of approximately 44 pages of chapter summaries, quotes, character analysis, themes, and more - everything you need to sharpen your knowledge of Dairy Queen.

Dairy Queen is a coming-of-age story about a high school sophomore, D.J. Schwenk, who learns the power of communication. D.J. narrates the novel. Therefore readers are privy to her feelings and thoughts.

At the beginning of the novel, D.J. is disgruntled and bears resentment toward her family. She is angry with her father for being hurt so that she has to maintain the farm by herself; she is angry with her mother for working two jobs and never being home; and she is angry with her two older brothers for leaving home and never speaking with the family and her younger brother for never talking. She has low self-esteem and hangs out with Amber, who puts everyone else down as a defense mechanism for her own secrets and insecurities. D.J. describes herself to readers as dumb, unattractive, and slow, creating low expectations for herself.

Readers gradually learn about the intense rivalry between D.J.'s high school (Red Bend) and the neighboring high school (Hawley) and why she so strongly detests Brian Nelson. They also learn why her older brothers left and don't speak with the family any more. Each time backstory is provided, it grows more evident to readers that D.J. is none of the negative things that she claims to be. She seems to realizing this slowly as well.

One plot-line in the novel is the web of broken relationships int the Schwenk family. No one in the family communicates their thoughts and feelings, so misunderstandings grow into resentments and anger, until a boiling point is reached and a major fight ensues. Because they refuse to talk about their issues, grudges are held, and the family has reached a point of gridlock where communication has completely broken down and their relationships are stuck.

Another plot-line in the story is Brian and D.J.'s relationship. The novel follows them from spiteful enemies, to friends and confidants, and eventually to being interested in one another romantically. While D.J. comes from a family of very poor communicators, Brian comes from a family where communication is a consistent part of daily life. D.J. helps Brian train for football, as she is very knowledgable about football and hard work, and Brian teaches D.J. how to communicate.

The theme tying the two plots together is football. Everyone in D.J.'s family is involved in football in some way and Brian plays football for the opposing high school's team. The novel end with the relationships all finding a path toward final healing, yet there is still ground to be covered. This novel is the first in a series by Catherine Murdock.

More summaries and resources for teaching or studying Dairy Queen.