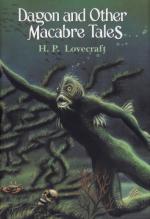 Dagon and Other Macabre Tales Characters

H. P. Lovecraft
This Study Guide consists of approximately 28 pages of chapter summaries, quotes, character analysis, themes, and more - everything you need to sharpen your knowledge of Dagon and Other Macabre Tales.

Dagon and Other Macabre Tales Summary & Study Guide includes comprehensive information and analysis to help you understand the book. This study guide contains the following sections:

This detailed literature summary also contains Topics for Discussion and a Free Quiz on Dagon and Other Macabre Tales by H. P. Lovecraft.

Herbert West is a doctor, trained at Miskatonic University, who developed a serum that he believes will reanimate corpses. While at college, he experiments on several cadavers, and although he has some preliminary positive results, he ultimately fails at reanimating a corpse. He is convinced that the failure of his experiments is due to the fact that his corpses are not fresh enough, so he spends some time acquiring fresher corpses first by hiring grave robbers and eventually by killing a man himself so that he can try to immediately reanimate him. As he begins to see more and more success, his obsession with reanimation grows. He eventually succeeds in reanimating his previous rival and dean of the medical school, Halsey. Halsey turns into a murdering cannibal, but this only redoubles West's desire to reanimate more effectively.

Eventually, West seems to become more and more obsessed with reanimating purely to reanimate. His once clear love of science and knowledge has given way to a obscene desire to experiment on corpses. It is while in the military that West is most successful in reanimating his former friend, the Major. By this time, the narrator is more afraid of West, who has gone completely mad and lost any shred of human morality or decency. Eventually, West is killed by his own creations in a gruesome fashion. Like doctor Frankenstein, his monsters killed their creator. The narrator is left to tell the police about this gruesome story, though the police do not believe the narrator.

The Old Godsappears in Several Stories

The Old Gods are not a character in any particular Lovecraft tale, but rather figure into several of his stories. These are gods of the ancient past that were worshipped by old, sometimes non-human creatures. These gods are very powerful and inscrutable to most modern men. They exist in both the dreamland stories and the stories that take place in the present day. Dagon is an old god, as is the water lizard Bokrug. These two gods have the form of fish or lizards, something common in many of the old gods. While in modern times, our gods are fairly abstract and worshipped out of love; the old gods are worshipped out of fear. They are appeased more than worshipped, the worship seems to be of avoidance and appeasement rather than actually out of love. When humans have the bad fortune of encountering these gods, as in "The Other Gods" it usually ends in the death or madness of the human. There is an assumption in the background that the "Old Gods" are the true rulers of the earth and that humans are, unknowingly, living as tenets in the home of the "Old Gods." This is part of the impact of "Dagon." The narrator goes mad once he sees the "Old God" partly because he realizes that he, a human, is no longer master of the planet or his environment. Compared to the "Old Gods" humans are merely pests, pests that can be eliminated if necessary. It is this sense of vulnerability that creates the horror of stories with the Old Gods.

In the story of the same name, Dagon is the name of an ancient part man part giant sea-god that the sailor believes he saw. In ancient times, though, Dagon was an actual sea-god worshipped by the northern neighbors of the Jews and is mentioned in the bible.

Joe Slater appears in Beyond the Wall of Sleep

In "Beyond the Wall of Sleep", Joe Slater is the man from the hills, described as over forty and an alcoholic who lives in an isolated community in the mountains. For some unexplained reasons, he begins to have strange vivid dreams that eventually lead him to murder a man and be committed to a mental hospital.

Bokrugappears in The Doom that came to Sarnath

Bail Elton is the guarder and the keeper of the North Point lighthouse. The lighthouse, and the duty to run it, was handed down from Basil's grandfather, to father, to him. Basil believes he sailed with a bearded man on a white ship through fantastical lands before finding himself back at the light house.

Menesappears in The Cats of Ulthar

Menes is one of the dark wonderers from the south that arrive in Ulthar. He has no parents and spends his time playing with a black kitten. After his kitten goes missing and is murdered, he calls down a curse from one of his gods that leads to the death of the cotter and his wife.

Kurane, the protagonist of the story "Celephais" is the last of his family, an upper class but disillusioned inhabitant of London who wants to live in his dream world of Celephais.

Crawford Tillinghast appears in From Beyond

Crawford is one of the main characters of "From Beyond." Tillinghast is the best friend of the narrator and is obsessed with metaphysical investigations, which lead him to ultimately build a machine to see into the nether realm that surrounds everyday life.

Karl Heinrich von Altberg-Ehrenstein was a Lieutenant Commander in the Imperial German Navy during World War I. He commanded a submarine that sunk the British freighter Victory and after a failed mutiny attempt, his submarine was damaged and sunk to the bottom of the ocean where he found an ancient city and eventually died while exploring the ancient temple in the city.

Barzaiappears in The Other Gods

Barzai the wise is the high priest of Ulthar who maintains the rites to the "great ones", the earth gods. The is some indication that he was the person who suggested the rule in Ulthar forbidding the killing of cats and his apprentice is Atal who witnessed the strange attack of the cats in the other story.

Iranon is a golden-haired ageless youth who travels from town to town-singing songs about his lost homeland Aira. He claims to be the prince of Aira, but once he learns that Aira is just a figment of his imagination, he dies.

Dagon and Other Macabre Tales from BookRags. (c)2022 BookRags, Inc. All rights reserved.