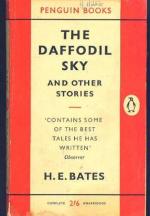 Introduction & Overview of The Daffodil Sky

When "The Daffodil Sky" was published in 1955, H. E. Bates was already well known as a prolific writer of short stories and novels. The story itself is the title piece of a collection that has been described as the crowning achievement in Bates's later career. "The Daffodil Sky" and the collection's other stories have received generous praise from reviewers. As testament to their popularity, no less than nine stories from the collection appeared in the 1963 anthology The Best of H. E. Bates. The reputation of "The Daffodil Sky" remains high. Critics have applauded the compelling nature of its visual and sensual images, and the story is indeed filled with sights, sounds, and smells which vividly recreate a rainy summer evening in a sooty English industrial town. The characters who populate Bates's story have been admired for their passionate vitality, a feature which has prompted comparisons between them and those in the works of D. H. Lawrence.

Although Bates's story shares general similarities with Lawrence's work, a more notable literary antecedent for "The Daffodil Sky" is Alfred, Lord Tennyson's Maud (1855). This poem provided Bates not only with his story's title but also with a pattern for the plot. Just as the nameless protagonist of Maud kills the man whom he perceives as an obstacle to his happiness in love, so too does Bates's unnamed young lover kill a potential rival for his love. The literary relationship between Bates and Tennyson lends support to Bates's acknowledged status as a prose poet and underscores the fact that Bates's subject matter has a universal appeal. "The Daffodil Sky" is about emotions; it is a tale of passion and jealousy, of rage and regret, and it plays out themes of alienation and loneliness which are common to the literature of many ages.