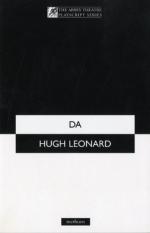 Hugh Leonard
This Study Guide consists of approximately 52 pages of chapter summaries, quotes, character analysis, themes, and more - everything you need to sharpen your knowledge of Da.

Home Before Night (1979) is Leonard's autobiography, which recounts some of the same incidents that appear in Da.

The Poker Session (1963) is a play by Leonard in which a family, brought together for a poker game after the release of one of its members from an insane asylum, reveals its hidden insanities.

Dancing at Lughnasa (1990), by Brian Friel, is an autobiographical story by one of the foremost contemporary Irish playwrights about a boyhood spent among five aunts in rural Ireland.

Dubliners (1914), by James Joyce, the great modernist Irish writer, is a collection of short stories about Dublin. Leonard adapted Dubliners to the stage in a play entitled Dublin One (1963).

The Politics of Irish Drama: Plays in Context from Boucicault to Friel (1999), by Nicholas Grene, includes critical discussion of the historical and political significance of major Irish playwrights.

More summaries and resources for teaching or studying Da.

Da from Gale. ©2005-2006 Thomson Gale, a part of the Thomson Corporation. All rights reserved.