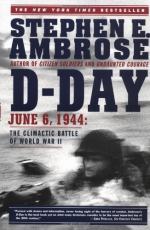 Stephen Ambrose
This Study Guide consists of approximately 81 pages of chapter summaries, quotes, character analysis, themes, and more - everything you need to sharpen your knowledge of D-Day, June 6, 1944.

What do you think is the biggest mistake on D-Day and is anyone personally culpable for it?

What do you think is the biggest success on D-Day, and can anyone take personal credit for it?

What are "Hobart's Funnies?" What role do they play, and why do the Americans not make use of them?

How do forces of nature affect the timing, placement and outcome of D-Day?

Is the government right in forbidding pictures of dead and wounded soldiers on D-Day?

What makes General Eisenhower a successful Supreme Commander? What are his strengths and weaknesses? What did he learn in North Africa and implement on Normandy?

Could Field Marshal Rommel have repulsed the Allies if he had been given Eisenhower's freedom to command? What might he have done differently?

How is the clichy "British brains and American brawn" accurate and inaccurate?