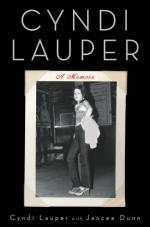 Cyndi Lauper
This Study Guide consists of approximately 17 pages of chapter summaries, quotes, character analysis, themes, and more - everything you need to sharpen your knowledge of Cyndi Lauper.

Cyndi Lauper begins her autobiography by detailing her early life, beginning with the fact that she left home at the age of seventeen to avoid her stepfather, a pedophile. A native of Queens, New York, Cyndi goes to live with her sister, Elen, in Stream Valley. It is through her mother and father that Cyndi develops a flair for, and love of music: from her mother's records and beautiful singing voice, to her father's love of Hawaiian music. Initially, Cyndi wants to be a painter, and takes odd jobs to support herself. All the while, she begins singing and making music, and eventually falls in with a few bands, among them, the Flyers. When she decides she wants to make music, she co-founds Blue Angel, which enjoys modest popularity before it breaks up.

From there, Cyndi is brought onto Epic Records through contacts, and produces her first solo album with hits such as "Girls Just Want to Have Fun" and "Time After Time". Her popularity takes off, and a slew of records, tours, and performances follow. As her popularity rises, she begins speaking out on women's rights, as well as gay rights, and becomes an outspoken supporter of the LGBT community, as well as pressing for AIDS awareness. She breaks up with her manager and boyfriend, David Wolff, and falls in love with an actor, David Thornton, whom she marries. They have a son, Declyn. Cyndy concludes her books with her most recent projects, the Memphis Blues tour, CD, and DVD, and her visit to earthquake and tsunami-ravaged Japan.

More summaries and resources for teaching or studying Cyndi Lauper: A Memoir.