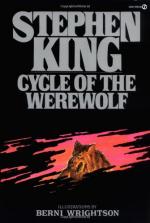 Cycle of the Werewolf Summary & Study Guide includes comprehensive information and analysis to help you understand the book. This study guide contains the following sections:

This detailed literature summary also contains Topics for Discussion on Cycle of the Werewolf by Stephen King.

Cycle of the Werewolf is one of Stephen King's shorter horror novels and the book is beautifully illustrated by noted comic book artist Berni Wrightson. The straightforward plot follows a year in the life of a small town in Maine as, on the night of each month's full moon, its residents are terrorized by a werewolf who turns out to be one of their own.

The story opens on a cold night in January as a blizzard shuts down Tarker's Mills, Maine. Railroad flagman Arnie Westrum is waiting out the storm in a small wooden shack when he hears an animal apparently trying to enter the building. In moments, a huge wolf breaks down the door and kills Arnie, thus setting off what will be a year-long cycle of terror and death.

The following month, the wolf's victim is a spinster, and her death is followed by that of a drifter, a young boy, a church custodian, a café owner, the town constable, a librarian, and various animals. As the months go by, rumors spread that the killings are the work of a werewolf, but the town's residents aren't sure what to believe and seem powerless to stop him.

Only one person actually sees the creature and lives to tell about it. He is Marty Coslaw, a 10-year-old boy who is confined to a wheelchair. On the Fourth of July, Marty creeps out of bed after his family is asleep to shoot off some forbidden fireworks and he is confronted by the wolf. Thinking quickly, Marty uses firecrackers to shoot the wolf, which puts out his eye and drives him away, saving Marty's life.

Several months later, on Halloween night, Marty rings the doorbell of Rev. Lester Lowe, the pastor of Grace Baptist Church. When he sees the reverend wearing an eye patch, Marty immediately realizes that he is the werewolf and begins sending him a series of anonymous notes. Marty's knowledge of his identity confirms Rev. Lowe's suspicion that something is terribly wrong with him. Over a period of time, he has noticed that on some mornings, he wakes up scratched and bruised with his clothing torn and traces of blood on his hands and lips, but he has no memory of what transpired the night before. Once he realizes what is happening, he takes the advice in one of Marty's notes and begins going outside the town on nights when there is a full moon, ensuring that he will kill only animals rather than people. However, he refuses to act on Marty's admonition to kill himself, believing that he is a man of God and that if God is displeased with him, He will bring him down in time.

In the meantime, Marty convinces his uncle that his tale about the werewolf is plausible, and on New Year's Eve, the two wait for the wolf to appear. Just before midnight, the werewolf does indeed come after Marty, but the boy is armed with a gun and two silver bullets which he uses to kill the wolf. As he dies, the wolf transforms back into the figure of Rev. Lowe. As the new year begins, the town is freed from its terror.

Cycle of the Werewolf from BookRags. (c)2022 BookRags, Inc. All rights reserved.