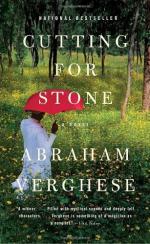 Abraham Verghese
This Study Guide consists of approximately 42 pages of chapter summaries, quotes, character analysis, themes, and more - everything you need to sharpen your knowledge of Cutting for Stone.

This detailed literature summary also contains Topics for Discussion and a Free Quiz on Cutting for Stone by Abraham Verghese.

Cutting for Stone is the complex story of the Praise family, focusing on twin brothers Marion and Shiva as they negotiate the hidden histories of their past while working hard to make medical advances for the future.

The novel opens with Sister Mary Praise leaving India to travel to Africa as a nurse. The ship she is traveling on has an outbreak of typhoid, killing many of the passengers. As she struggles to provide proper medical attention, she meets and falls in love with British doctor Thomas Stone. When they reach their destination, Stone asks Mary to come with him to Ethiopia where he is contracted to work at Missing Hospital, but Mary refuses, since she has promised to take up a post in Aden, Yemen. When Mary is raped at her post, she travels to Missing and is reunited with Stone. For seven years the two work side-by-side but never profess their love for each other. Unexpectedly, Mary goes into labor with twins, a shock since she claims to be a celibate nun, but everyone around Missing knows that Thomas Stone is the father. Everyone except Thomas Stone, that is. He does not remember impregnating Mary because he was blacked out drunk. Sister Mary Praise dies during childbirth, and Thomas Stone goes mad with grief. He runs away from Missing, leaving behind his twin sons, whom he has no desire to raise, in the hands of Hema, the resident gynecologist, who happily raises the boys with her husband, Ghosh.

As the twins age, they often wonder about their father, Thomas Stone, and why he abandoned them. They love their parents, Hema and Ghosh, but Marion in particular, daydreams about his real father returning. Marion spends most of his childhood obsessing over his best friend, Genet. He is desperately in love with her and fantasizes about marrying her, losing his virginity to her, and raising a family with her. Genet betrays him when she is sixteen and loses her virginity to Shiva, Marion's twin brother, instead. Marion is never able to forgive Shiva for this betrayal and their relationship is severely damaged. In medical school, Genet joins a rebel party that has plans to overthrow the government, and she high-jacks an airplane. Somehow, Marion's name comes up in questioning and he is named as a suspect. Marion is forced to leave Africa forever and take up medical residence in America. He does not plan to ever see Genet again, and if he does, he plans to kill her. Shortly before Marion is forced to leave the country, Ghosh dies from leukemia and asks Marion, on his deathbed, to find Thomas Stone and tell him that Ghosh forgives him for his mistakes all those years ago. Marion is devastated by this final request, but knows he will fulfill Ghosh's wishes.

In America, Marion starts his residency at Our Lady of Perpetual Succor. There, he thrives under the influence of Chief Resident Deepak, whose calm manner and courageous spirit in the operating theatre creates buzz about his work. One of the surgeons who visits Deepak during surgery is none other than Thomas Stone, whose appearance throws Marion through an emotional loop. He tracks Stone down and then breaks into his apartment, trashing it. Realizing who the vandal was, Stone reaches out to Marion and the two meet for an awkward dinner where they discuss Sister Mary Praise. Stone proves to be a man in high distress who has never fully recovered from Sister Mary Praise's death. The two carry on a strained relationship for many years. During this time, Genet returns to Marion's life and the two finally sleep together. Marion contracts hepatitis from her, and becomes terminally ill. Stone immediately sends for Hema and Shiva, who fly from Ethiopia. Marion hasn't seen either of them in over seven years. When it becomes clear that Marion will certainly die, Shiva proposes a risky surgery in which he donates half of his liver so Marion can survive. Although he is hesitating, Stone agrees to perform the surgery. Ultimately, Marion survives but Shiva dies.

More summaries and resources for teaching or studying Cutting for Stone.