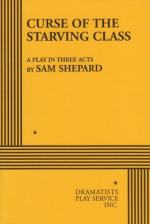 Curse of the Starving Class Summary & Study Guide includes comprehensive information and analysis to help you understand the book. This study guide contains the following sections:

This detailed literature summary also contains Topics for Discussion on Curse of the Starving Class by Sam Shepard.

Curse of the Starving Class is a play in three acts by Sam Shepard that tells the story of a dysfunctional family living in a farmhouse they are planning to sell in the hopes of moving on to bigger and better things.

Act 1 opens with Wesley piling broken pieces of the front door into a wheelbarrow, although Ella, his mother, thinks he should leave the pieces for his father to clean up since he broke the door in the first place. The events of the previous night are discussed and then Wesley leaves. Ella starts speaking about menstruation, and during this talk, Emma, her daughter, enters and joins in. Emma is carrying materials for her 4-H project on how to cut up a chicken for frying. She goes to look for her chicken in the family’s refrigerator only to find it is gone. Emma accuses her mother of boiling the chicken and then leaves in a huff.

Wesley returns and begins to yell about how the chicken is pointless in the face of other things. When Emma returns, she, Wesley, and their mother begin to argue about the starving class and if they are a part of it. In the heat of the argument, Wesley urinates on Emma’s posters causing her to storm off, threatening to take the horse and run away.

Ella confesses to her son she is planning to sell their house and take the money for a trip to Europe. Emma comes back, drenched in mud from being dragged by the horse and speaks to her mother about wanting to become a mechanic in Mexico.

Taylor, Ella's lawyer, enters and talks about selling the house. Wesley returns with a lamb from outside. The conversation between the three in the kitchen is tense when Ella comes in, and she and Taylor head out for a business meeting. Wesley is left alone with the lamb until Weston stumbles in drunkenly, bearing a bag of artichokes he purchased while paying a visit to a property in the desert that belongs to him. Act 1 ends as Weston and Wesley discuss how best to get rid of the maggots living in the lamb’s digestive tract.

Act 2 starts with Wesley again, who is working on a new front door for the house. Emma is there as well, and they are discussing their house being sold and the nature of their mother’s relationship with her lawyer. Wesley compares the way everything is being suburbanized to being invaded by zombies, and talks to his sister about how he wants to go to Alaska.

Weston comes back, even drunker this time, and demands to know where Ella is. He tells them he has found someone who wants to buy the house. Wesley tells his father Ella has been speaking to a lawyer about selling the house, and Weston gets angry, threatening to kill Ella and Taylor. He passes out immediately after his outburst. He continues his rant as soon as he wakes up, ignoring his son’s suggestions about planting avocados, then he’s out cold again at the kitchen table.

Ella returns with groceries and says she knows there is a curse working against family. Ellis, the owner of the bar where Weston drinks, enters with $1500 and says he owes Weston for the sale of the house; Ella orders her son to throw him out. Mother and son find out Weston is in debt to some dangerous men. Wesley says he’ll take the money to the men, but Ella says no. Taylor shows up then with the final draft of the deed of sale for the house. Ellis threatens Taylor, and the lawyer asserts that Weston is in no position to sell the house.

In the midst of all this, Sergeant Malcolm enters and tells the family Emma has been arrested for shooting up and riding her horse through the Alibi Club that Ellis owns. Taylor takes his leave, although Wesley thinks he should be arrested. Ellis takes back the money saying he is owed it for the damage Emma did to his bar. The act ends with Ella agreeing to pick Emma up from the police station.

Act 3 finds Weston awake and in clean clothes. He is talking to the lamb about cutting off the testes of lambs and throwing them to the roof so an eagle can eat them. Wesley shows up bloody and tells his father he tried to get the money back. Weston tells his son that he cleaned up and did the laundry and offers him breakfast. Ella comes in and says she has been to the jail to visit Emma. It is not long before Ella starts screaming at Weston. He tells her to take a nap on the table. She is reclining on it as Wesley, who is naked, comes in, takes the lamb, and leaves with it.

When Wesley returns, he tells his father he killed the lamb so that they would have something to eat, but Weston is angry and shows him the refrigerator stocked with food. Weston thinks about fleeing to Mexico to avoid the men to whom he owes money, and Wesley suggests finding Taylor to get the money back for the desert property. Emma enters as Weston leaves, and Wesley tells her he can feel himself becoming their father. Emma steals from Ella’s purse and announces she is starting a life of crime.

There is an explosion offstage then, waking up Ella who has been sleeping on the table. Emerson and Slater, men to whom Weston owes money, enter carrying the lamb carcass and bragging about how they blew up Weston’s car, probably killing Emma who was in it. They threaten the family and then leave. The play ends with Wesley and Ella talking about Weston’s story about the eagle.

Curse of the Starving Class from BookRags. (c)2022 BookRags, Inc. All rights reserved.