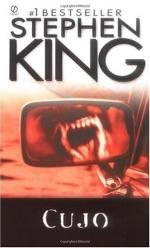 Stephen King
This Study Guide consists of approximately 38 pages of chapter summaries, quotes, character analysis, themes, and more - everything you need to sharpen your knowledge of Cujo.

Steve Kemp goes to stay at the YMCA in Portland, Maine. Kemp has concluded his business in Castle Rock, sending letters to his clients informing them of how to retrieve their furniture, and he pays his rent in full.

Charity Camber asks her son, Brett, how he would like to go visit his Aunt Holly in Connecticut. Brett is excited about the idea, but is concerned that his father will not allow them to go. Charity explains that she won some money in the lottery and she wants to buy Joe something to help convince him to allow them to go. Brett suggests that she buy his father a chainfall that he has been wanting.

Vic leaves his office to get some coffee at a nearby diner. As Vic drinks his coffee, he has an idea about an ad featuring the...

More summaries and resources for teaching or studying Cujo.