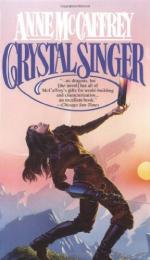 Anne McCaffrey
This Study Guide consists of approximately 30 pages of chapter summaries, quotes, character analysis, themes, and more - everything you need to sharpen your knowledge of Crystal Singer.

"Crystal Singer" by Anne McCaffrey is the first novel in the Crystal Singer trilogy. In this novel, Killashandra learns that the career she has been training ten years for is out of her grasp. Overwhelmed with loss, Killashandra leaves her school and immediately meets a unique young man named Carrik, who is a crystal singer with the Heptite Guild. Although Carrik becomes fatally ill, Killashandra decides to become a crystal singer herself. Killashandra goes through the training and discovers she has natural abilities that will make her the star she has always wanted to be. "Crystal Singer" is a futuristic novel filled with traditional themes of ambition and self-discovery that will satisfy even the most finicky of Anne McCaffrey's fans.

Killashandra learns that she has failed the final tests of her musical education. Since Killashandra always thought she would be a star, she decides to leave the school to avoid becoming second best. Killashandra has never been anywhere other than her native planet, so she decides to go to the spaceport where she might be able to find a job off planet. Suddenly hungry, Killashandra goes to a restaurant where she enjoys a surprisingly good meal. While there, she hears a piercing sound and then overhears a man demanding to speak to the control supervisor. The man claims to be a member of the Heptite Guild, an organization Killashandra has never heard of. When the man, Carrik, learns that Killashandra heard the noise as well, he invites her to join him for the free meal the control supervisor has offered.

Killashandra and Carrik end up spending several weeks together enjoying the more touristy areas of her home planet. When Carrik begins having odd seizures in the night, he tells Killashandra that he must return to Ballybran, the planet where he works. Killashandra insists on going with him. In fact, Killashandra wants to become a crystal singer like Carrik despite his warnings against the profession. When they arrive at the spaceport, Killashandra is detained by her former teacher who is concerned for her. During the delay, a damaged shuttle attempts to land. When the shuttle explodes, Carrik is fatally injured by the final sonic blast. Killashandra escorts his body back to Ballybran, and is rewarded with a thousand credits and a ticket anywhere she wants to go.

Killashandra takes a room on the moon base and arranges to take the tests to become a crystal singer. When Killashandra passes the tests, she is moved to new quarters. The following day, Killashandra and her fellow recruits learn the truth about the dangers of being a crystal singer. A symbiont that protects people on Ballybran enters their bodies upon arrival on the planet and causes an illness within ten days. Those who suffer the illness could also be left with a physical impairment, such as deafness, that will disallow them from becoming crystal singers and force them into a support position that will prevent them from ever leaving the planet. However, the symbiont also keeps the person from growing old and enhances their other senses.

Killashandra goes out into the planet to cut crystal for the first time weeks ahead of the others. Killashandra quickly finds a black crystal claim that belonged to a crystal singer who recently died. This allows Killashandra to bring in a large amount of very valuable black crystal. Lanzecki then arranges for Killashandra to install the crystal on and around an ore mining planet so that she can escape the dangerous side effects of the Passover storms. When Killashandra returns, she takes refuge on the moon base with Lanzecki.

More summaries and resources for teaching or studying Crystal Singer.