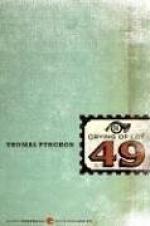 Thomas Pynchon
This Study Guide consists of approximately 72 pages of chapter summaries, quotes, character analysis, themes, and more - everything you need to sharpen your knowledge of The Crying of Lot 49.

The Crying of Lot 49 Summary & Study Guide includes comprehensive information and analysis to help you understand the book. This study guide contains the following sections:

This detailed literature summary also contains Related Titles and a Free Quiz on The Crying of Lot 49 by Thomas Pynchon.

Oedipa Maas is surprised to find that she has been named co-executor of the will of her former lover, real estate investor Pierce Inverarity. Her husband, Mucho Maas, an overly sensitive DJ, is not helpful, and neither is her psychiatrist, Dr. Hilarius, who calls her in the middle of the night and encourages her to participate in a study in which housewives take LSD.

In San Narciso, California, a suburb of Los Angeles where Inverarity had many financial interests, Oedipa begins to untangle the estate with the help of her co-executor, the attorney and former child actor, Metzger. She stays at Echo Courts Motel, where she becomes acquainted with the manager, Miles, member of a Beatles-wannabe rock group called the Paranoids. Metzger and she become lovers, as she watches a film he supposedly starred in as a child, frequently interrupted by commercials advertising properties and companies in which Inverarity had financial interests. These include a housing development named Fangoso Lagoons, and Beaconsfield Cigarettes, which marketed a cigarette with filters made of bones.

Oedipa and Metzger begin to frequent a bar named The Scope, a hang-out for electronics assembly workers from the Galactronics Division of Yoyodyne, Inc., a high-tech conglomerate which Inverarity was instrumental in bringing to San Narciso. The workers appear to be utilizing a secret mail delivery system called WASTE, whose symbol is a muted post horn. One fellow, by the name of Mike Fallopian, tells them about the Peter Pinguid Society, a group named for a disgruntled Civil War naval commander who unsuccessfully attempted to open a new front for the war off the coast of San Francisco. Fallopian is writing a book about the federal government's purported attempts to suppress independent mail routes around the time of the Civil War.

On a trip to Fangoso Lagoons with Metzger and the Paranoids, Oedipa meets Manny Di Presso, a lawyer representing Tony Jaguar, who has filed suit against Beaconsfield Cigarettes for nonpayment for a shipment of bones. Di Presso reveals that the bones came from Lago di Pieta, a lake in Italy where a company of American GI's perished during World War II. Oedipa and Metzger then see a performance of The Courier's Tragedy, whose complex Jacobean plot includes an Italian lake where a number of soldiers were killed, a postal conspiracy referred to by the mysterious name, Tristero. Oedipa seeks out the director, Driblette, in his dressing room afterwards to ask about Tristero, but he evades her inquiries.

While attending a stockholders' meeting at Yoyodyne, Inc., Oedipa meets a frustrated inventor named Koteks who tells her about a machine called the Nefastis Machine created by John Nefastis, member of a secret society of frustrated inventors. Oedipa also visits a home for senior citizens, Vesperhaven House, which Inverarity founded. There she speaks with Mr.Thoth, whose grandfather rode for the Pony Express in the Gold Rush days. Mr. Thoth shows Oedipa a ring given to him by his grandfather which bears the muted post horn symbol. Subsequently Oedipa learns from a philatelist, named Genghis Cohen, about counterfeited stamps from Inverarity's collection which contain further evidence of the postal conspiracy.

Oedipa makes a trip to the San Francisco Bay area to see John Nefastis, and seek a copy of the book containing the text of The Courier's Tragedy. After determining that the book's editor, Prof. Bortz, is now a professor at San Narciso College, Oedipa embarks on an all-night odyssey around San Francisco, where she catches sight of the muted post horn symbol in a number of locations. She also learns of another secret organization using the muted post horn symbol, Inamorati Anonymous, whose members are dedicated to avoiding love.

On the way home she stops off in her hometown, Kinneret, to find that her psychiatrist, Dr. Hilarious, is suffering a paranoid episode and has locked himself in his office with a rifle. He reveals to Oedipa that he worked at Buchenwald concentration camp, doing research on experimentally induced insanity. When Oedipa seeks his opinion as to whether she too is suffering from a paranoid delusion, Dr. Hilarious counsels her to cherish her fantasies. After he is captured by the police, she finds out that her husband, Mucho, has multiple personality disorder due to ingesting LSD.

Professor Bortz provides her with more information about the history of the Tristero organization. At the same time, Mike Fallopian suggests that all her sources of information are suspect. Unable to determine whether she has truly detected an alternative communications system secretly embedded in modern capitalist society, or is herself suffering from a paranoid delusion, Oedipus sinks into complete isolation. She finally decides to attend the auction, known as a 'crying,' of Inverarity's stamp collection, and to confront the secret bidder for the counterfeit Tristero stamps, collected as Lot 49.

More summaries and resources for teaching or studying The Crying of Lot 49.