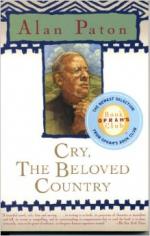 Alan Paton
This Study Guide consists of approximately 13 pages of chapter summaries, quotes, character analysis, themes, and more - everything you need to sharpen your knowledge of Cry, the Beloved Country.

Cry, the Beloved Country was written by South African author Alan Paton. As the story opens, the year is 1946. Stephen Kumalo, the reverend of a village church in Ndotsheni, which is in the province of Natal in South Africa, receives a letter from a reverend named Msimangu in Johannesburg. The letter urges him to come to the city to take charge of Kumalo’s sick sister Gertrude and her small son. Despite limited savings, Kumalo and his wife decide he should go help Gertrude and also look for their son Absalom, whom they haven’t heard from in a year.

After making the day long journey to Johannesburg and getting immediately conned by a local, Kumalo finds his way to Msimangu, who offers his assistance with Kumalo’s search. Msimangu admits Gertrude is not sick but has fallen into liquor and prostitution. The two priests quickly locate her. Kumalo admonishes her for her new lifestyle and the neglect of her son. Gertrude repents and agrees to return to Ndotsheni with Kumalo. He moves her into the house of Mrs. Lithebe, where he is staying. Kumalo and Msimangu dive into the search for Absalom with less luck. They visit a series of houses where Absalom was living with his cousin Matthew; but, they always arrive long after Absalom has left. There are hints that Absalom has been in trouble. Kumalo visits his brother John, a relatively powerful and wealthy carpenter who has turned to politics. He kicked his son Matthew out long ago. He doesn’t know the whereabouts of either Absalom or Matthew.

They track Absalom’s movements to a reformatory, where his life seemed about to turn around. He was doing well and had been granted an early leave to marry a girl he had impregnated. He also had a steady job. But, the white reformer who speaks so highly of Absalom is shocked to learn that Absalom has stopped going to work, and the girl he is set to marry hasn’t seen him for days. News travels around of the murder of a prominent white reformer named Arthur Jarvis in his own home, and Kumalo fears Absalom may have been involved.

Kumalo’s worst fears are proven. Absalom killed Arthur Jarvis during a house break-in that went wrong. Kumalo is further horrified when he realizes Arthur is the son of James Jarvis, a wealthy white farmer who lives above Ndotsheni’s valley. Absalom had two accomplices in the crime, his cousin Matthew and a man named Johannes Pafuri, who knocked Arthur’s servant unconscious with an iron bar. John Kumalo decides to hire a lawyer for Matthew and Johannes.; The defense will be that the two young men were not present for the crime. Kumalo visits his son in jail; Absalom cannot explain how his life turned so violent. The white reformer is angry at Absalom for ruining the reputation of the reformatory. However, he agrees to help find Absalom a lawyer. A white English priest named Father Vincent also offers to help. They hire a man named Carmichael, who builds a defense based on the truth. Kumalo takes in Absalom’s pregnant girl, wanting to do the right thing for his grandchild.

James Jarvis and his wife travel to Johannesburg in the wake of their son’s death. James had not understood his son’s passion for equal rights for blacks. But, as he starts to read through Arthur’s papers, he sees the wisdom of his son’s chosen vocation. James and Kumalo have an unexpected encounter when Kumalo visits a relation of the Jarvises while seeking an Ndotsheni girl who has gone missing. As Kumalo and Jarvis realize how their lives are intertwined, Jarvis has no malice toward Kumalo for Absalom’s actions, even showing the old reverend some compassion.

Despite the truth, Absalom alone is found guilty of the crime against Arthur Jarvis and is sentenced to hang. Kumalo visits his son a final time in jail, hoping the boy has repented his actions. Father Vincent arranges the marriage between Absalom and the girl before Kumalo takes his remaining family back to Ndotsheni. There is a small chance that Absalom’s sentence will be commuted by a governor, and Msimangu promises to keep Kumalo informed on developments. Msimangu gives Kumalo a generous financial gift to ease his burden with his suddenly increased family. On the morning they are set to travel to Ndotsheni, Gertrude, who was briefly considering becoming a nun, disappears back into her immoral life.

Despite his family troubles, Kumalo is greeted warmly by the villagers he left behind. His wife embraces the girl and Gertrude’s son as her own children. Arthur Jarvis’ young son, who is staying at his grandparents’ house, happens upon Kumalo. They strike up a friendship. Kumalo is astonished by his generosity and confidence. Through him, James Jarvis begins patronizing the drought-stricken community, sending milk for the children and arranging for the building of a dam. James hires an agricultural planner to help revolutionize farming in the valley. When James’ wife dies, Kumalo feels her death must have been from a broken heart. In a letter, James assures him that she was already ill and wanted to help build a new church in Ndotsheni. The friendship between James and Kumalo saves Kumalo from being sent away by his local bishop.

Absalom writes to his family to tell them that he has not received mercy; he will be hanged. On the night before his son’s death, Kumalo climbs a nearby mountain to pray for his son’s soul. He runs into James Jarvis, who assures him he will do everything in his power to regenerate the valley. Kumalo prays, thankful for all the people who showed him kindness on his journey. He asks God for the peaceful rebirth of Africa as a continent.

More summaries and resources for teaching or studying Cry, the Beloved Country.