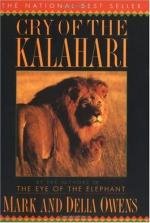 Mark James Owens
This Study Guide consists of approximately 30 pages of chapter summaries, quotes, character analysis, themes, and more - everything you need to sharpen your knowledge of Cry of the Kalahari.

Cry of the Kalahari Summary & Study Guide includes comprehensive information and analysis to help you understand the book. This study guide contains the following sections:

This detailed literature summary also contains Topics for Discussion and a Free Quiz on Cry of the Kalahari by Mark James Owens.

Mark and Delia Owens meet as students at Georgia State University. They have much in common, especially their love for animals of the wild. They decide to self-fund a research project in Africa. They temporarily quit school, take on rather menial jobs and save their money toward their goal. After three long years, they take their savings augmented by money received for selling everything they have and head to Africa. They arrive in Johannesburg, take a short plane hop to Botswana and from a small village named Maun they venture out to the uncharted Kalahari Desert wildlife reserve. In a third-hand Land Rover that is not without its mechanical problems, they travel over rough terrain and arrive at Deception Valley where they will, unknown to them at the time, spend the next seven years.

Due to limited funds, their sparse camp provides little protection from the environment and from the many predators that with curiosity begin noticing the strange new creatures. The Valley of Deception is so remote that most of the animals who reside there have never seen a human and therefore do not instinctively fear them. Mark and Delia are as careful in their approach to the animals, but there are frightening incidents involving them. Delia is uncomfortable sleeping in the truck so she decides to sleep in the rickety tent they set up. She senses a presence and looks up to see two huge male lions poking their head in the tent's opening, staring at her. Each cat weights upwards of 450 pounds of pure muscle. She freezes until Mark who jumps to action when he sees that his wife is in trouble slowly drives the truck toward them. They retreat without incident but feel comfortable enough to return often.

The Owens' research project focuses on the feeding habits and behavior of the brown hyena in addition to the desert lion. Before their research, work was done on the Serengeti spotted hyena and lion but not much was known about the animals in the Kalahari. They do their best with heir limited funds and the adverse living conditions, but they eventually run out of money. Just in the nick of time, they receive a small award from National Geographic that keeps them going. Later, just about out of money again, the Frankfurt Zoological Society grants them a large award allowing them to continue their research.

Mark and Delia Owens discovered important data about the animals they studied. They found that unlike the Serengeti lion, the Kalahari lionesses are welcomed in different prides. In general, the Kalahari lioness is a more devoted mother than those in the Serengeti. The fact that the brown hyena lives in clans at first mystified Mark and Delia. Since hyenas are lone scavengers they could see no reason for them living in clans. Later, they discover that the brown hyena's cubs are raised communally. In the cases of both the desert lion and the brown hyena, Mark and Delia determine that the adverse conditions of the Kalahari that include fires, droughts and lack of food and water are the compelling reasons for the animals' unique behaviors.

After seven years in the Kalahari, Mark and Delia have grown to love and respect the animals they studied and knew so well. But their research is complete and it is time to go home. They fly away from their beloved animals with regret. They truly could have lived there forever.

More summaries and resources for teaching or studying Cry of the Kalahari.

Cry of the Kalahari from BookRags. (c)2022 BookRags, Inc. All rights reserved.