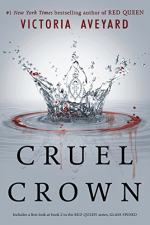 Victoria Aveyard
This Study Guide consists of approximately 39 pages of chapter summaries, quotes, character analysis, themes, and more - everything you need to sharpen your knowledge of Cruel Crown.

The following version of the novel was used to create this study guide: Aveyard, Victoria. Cruel Crown. HarperTeen, Jan. 5, 2016.

In Cruel Crown by Victoria Aveyard Coriane Jacos and Diana “Lamb” Farley envision a world where the Silvers appreciate the abilities the Reds have to offer and no longer abuse that class of people. A member of nobility, Coriane wishes that the Silvers could understand that Reds were just as gifted as Silvers, they just had different types of gifts. Lamb, on the other hand, bears the scars caused by watching her family torn apart because of forced conscription by the Silvers.

Cruel Crown is comprised of two different novellas, the first of which is Queen Song. Queen Song tells the story of Coriane Jacos, a member of the poorest and least powerful among the Silver houses of nobility. Despite her family’s low standing, Coriane caught the eye of the king with her quick wit and sarcasm. Unfortunately, she also caught the eye of Elara Merandus, a woman who had hoped to compete in the coming Queenstrial, a competition in which the most talent woman was chosen to be the wife of Prince Tiberias, in line for the throne. Tibe, however, decided to marry Coriane without a Queenstrial. Elara used her ability to invade Coriane’s mind to drive Coriane mad, resulting in the young queen killing herself. Elara also destroyed Coriane’s diary, a journal that would have let others know that Elara was responsible for Coriane’s death.

In Steel Scars, the second novella, Diana “Lamb” Farley is a member of the Scarlet Guard, a group of Reds working to overthrow the Silvers. Her story is completely different from Coriane’s because it gives a look at the feud between the Reds and Silvers from the viewpoint of those being abused. Lamb and her soldiers have seen families torn apart because of Silver requirements that all Reds who do not have a job must be conscripted to the fight for the Silvers. Lamb believes this conscription, as well as the constant fighting between different groups of Silvers, is part of a plan to exterminate the Reds.

Lamb fights for the cause of the Scarlet Guard alongside her father, a Colonel, whose codename is Ram. Lamb both respects and hates her father. In Steel Scars, she is given her first independent mission. She hopes that she will be able to successfully complete the mission and prove that she is a serious soldier. Although she makes progress in creating contact points through Reds in the city of Corvium, she is ordered to return to base, an order that she ignores. She trusts her guts and stays with her mission until she is able to return to the Scarlett Guard with two new conscriptions; Shade Barrow and his sister Mare, both of whom have special abilities invaluable to the Guard.

More summaries and resources for teaching or studying Cruel Crown.