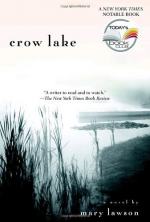 Mary Lawson
This Study Guide consists of approximately 29 pages of chapter summaries, quotes, character analysis, themes, and more - everything you need to sharpen your knowledge of Crow Lake.

This detailed literature summary also contains Topics for Discussion and a Free Quiz on Crow Lake by Mary Lawson.

Crow Lake is a novel by Canadian writer Mary Lawson. This novel is about the disappointments between siblings that can result in lifelong misunderstandings. Kate Morrison is only seven years old when her parents are killed in a car accident and her older brother Luke decides to take custody of the younger girls so that his brother, Matt, can attend university. Matt is the first in their family to go to college. However, a one-time mistake leads to circumstances that end Matt's hopes of higher education. Crow Lake is a novel of catastrophe overshadowed by tragedy that changes destiny. It is a novel of sibling love that overshadows even reality.

Kate Morrison recalls the last family dinner she had with her parents. Her brother Luke has just been accepted to teacher's college and is the first Morrison in the family to ever go to college. Kate's parents decide that he will need a suitcase. The following day, as soon as the boys get off work at a nearby farm, the parents go into town to buy the suitcase. The kids spend the day at the lake behind their house. On their way back to the house, the kids find the local sheriff, preacher, and doctor waiting for them. A truck had lost its brakes and killed their parents.

The first few days the children manage with the help of neighbors who bring meals and things they think the kids will need. After the funeral, their father's sister comes to stay until permanent plans can be made for the children. After meeting with the family lawyer, the aunt makes the decision to use what is left of the family money to send Luke to teacher's college. The other children will be divided up among family farms. Katie takes this news hard, afraid that she will never see her beloved brother, Matt, again.

During the long summer that the children spend waiting for the time to leave, the local teacher comes to see their aunt. Katie overhears the teacher asking the aunt if it would be possible to allow Matt to finish his education. Matt is highly intelligent and could probably get scholarships to go to university. The aunt refuses however, claiming there is not enough money to send both Luke and Matt to school. That night, Katie tells Matt and Luke what she heard. Matt tells her not to worry about it and that everything will be fine.

The following morning Luke is gone before everyone wakes. Luke is gone all day, missing work and caring for baby Bo. When he finally returns home, Matt is angry with Luke. This anger only increases when Matt learns that Luke has decided that instead of going to teacher's college, he will remain at home to care for the girls. This will allow Matt to finish his thirteenth year and go to university. The aunt and Matt both object but Luke sticks to his guns and insists that this is the only solution that makes sense.

The aunt leaves a month or so later. The children struggle on their own. At first Luke is able to get a job in the afternoons that allow him to be home for Bo and Katie. However, this job ends when the vindictive daughter of his bosses spreads false rumors about Luke. The family struggles for a time as the money becomes scarce and there are no prospects for a new job. Luke works temporary jobs and finally allows neighbors to sit with the girls, slowly finding a way to survive.

Matt continues to work on a neighbor's farm during the summer, fall, and spring months. One afternoon, the neighbor's son walks away after a fight with his father and disappears. No one in the area is too concerned however, because this family has a history of children running away. This situation causes Matt to be thrown together with the farmer's daughter, Marie. That summer Katie overhears a fight between Matt and Marie. Katie learns that Marie is pregnant and terrified of what her father will do about it.

That same night, Katie comes to the Morrison house hysterical. Marie believes her father has learned about her pregnancy and that he will kill her just like he killed her brother. Luke and Matt call the police. Marie tells the police how she saw her father kill her brother. The police go to arrest Marie's father, but he commits suicide before they can.

Matt marries Marie and together they take over Marie's family farm. Katie grows up to go to university and live the life that she believes Matt should have lived. This leaves Katie filled with guilt that nearly ruins her relationship not only with Matt but also with her new lover. Katie goes home for her nephew's eighteenth birthday party and is confronted by Marie. Marie wants Katie to know that the only person who regrets Matt's past is Katie. Katie finally understands that Matt made the decisions that were ultimately right for his life.