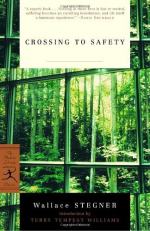 This detailed literature summary also contains Topics for Discussion and a Free Quiz on Crossing to Safety by Wallace Stegner.

Two young ambitious couples become friends in Madison, Wisconsin, when the two husbands begin their academic careers as professors at the University of Wisconsin in the 1930s. The novel follows their friendship through forty years of career ups-and-downs, health problems, children, successes, and failures.

Sally and Larry Morgan come from the West, and they have no family or money, but Larry has talent and burning ambition. He knows how to set goals and accomplish them. Although his friends' connections and backgrounds make him jealous at times, he knows he can attain what he wishes. Sally is shy, sweet, and loyal. She withholds judgment and makes a family of her friends, for she has no family of her own.

Sid and Charity Lang were born to Harvard. They have come to Wisconsin in a pioneering spirit, seeking to spread a little of the culture that has inherently been theirs. Sid has as much talent as any of his peers, but he lacks Larry's confidence and drive. He fears that he won't be accepted for who he is, and he leans on his wife and caves to her iron will. Charity is as bright and beautiful as a goddess. Her Harvard professor father has been bossed around all his life by Charity's mother, and Charity very much takes after her. With all the goodness in her heart, Charity makes plans for others, wanting to do what's best for them, but not always seeing that sometimes they need to do things for themselves.

Sally and Charity are both expecting children when the story opens, and they bond as they prepare for the babies. The Langs take the money-poor Morgans under their wing and provide luxuries for them that they otherwise wouldn't have known. They have parties, vacations at Charity's family cabin, and picnics on the lake. Sid and Larry develop their friendship as they struggle through work, both being the youngest and least published faculty on the staff.

Larry's ambition earns him quick publications, and Sid finds himself without a job as cuts are made to the faculty. They part ways several times, but their binding friendship always brings them together, especially to Battell Pond, the cabin where they have shared so many summer memories.

During one of these summer outings, Sally is struck by polio, and she is disabled for the rest of her life. This is a kink in the plans that Charity, with all her contacts and resources, cannot fix. Although Sally weathers her trial with endless patience, Larry must learn some patience and resignation himself. Sally can no longer get around by herself and must rely on others for even small tasks such as getting herself dressed in the morning.

In the end, it is Charity, the master planner, who succumbs to death first. From the time of his marriage, Sid has relied on her to plan everything for him, from his career to his family. At times he has resented her constant interference, but now that she is leaving him, he must learn to alter a lifetime of habits and stand on his own. Luckily, he has his lifetime friends with him.