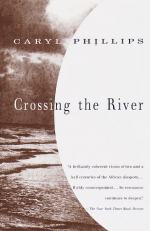 This detailed literature summary also contains Topics for Discussion and a Free Quiz on Crossing the River by Caryl Phillips.

The first section of Crossing the River is a novella, "The Pagan Coast," the tale of an ill-fated project of the American Colonization Society to educate slaves in Christian ways and then ship them to Liberia where they will carry the Gospel to the pagans in the interior of Africa. The central characters are Nash and Edward Williams. Edward is a well-meaning but naive slave owner in Virginia, and Nash is his slave, whom he adopts into his family at an early age. When Nash is a young man, groomed for the task and on fire for the mission, Edward sends him to Liberia, where he faithfully sets out to civilize the savages. Gradually - and due in part to a breakdown in communications, which prevents Edward from receiving his letters - Nash becomes disillusioned with the ways of the white man and the notion that white civilization will work in Africa. The life in Africa is harsh, and many of the transported former slaves die from fever and other diseases. Eventually, Edward travels to Africa to find Nash. By the time Edward reaches the village that Nash established, however, his former slave is dead, and all that remains of his work is a village of lethargic blacks living in the same squalor as the other natives. The shock is too much for the self-righteous Edward, and he goes mad.

The second work in the collection, "West," is a short vignette involving an old escaped slave named Martha, who is abandoned by fellow blacks in a doorway in Denver, Colorado during a winter blizzard. The abandonment is not an act of cruelty, but necessity. She was attached to a wagon train of blacks headed for California in the mid-1800s and grew too ill to continue. Martha is near death, and in her fevered hallucinations, she relives segments of her past. She, her husband and their only child, a daughter, are sold to different owners when their original master dies. Martha escapes from her new owners and flees to Dodge City, Kansas. There, as a free black, she falls in love with a black cowboy and opens a restaurant. When her cowboy is killed in a gunfight, she moves to Leavenworth, Kansas and opens a laundry. There she meets the wagon master, who agrees to take her west with his train. While she is shivering in the Denver doorway, a mysterious white woman discovers her and takes her to an unheated cabin, where Martha dies in the night. When the white woman returns to find the corpse in the morning, she realizes that she never asked Martha's name, and she frets over the necessity to give her a Christian name, so that she might receive a Christian burial.

The third work bears the same title as the novel, "Crossing the River," and takes the form of a ship's log. Captained by Englishman James Hamilton, the ship sets sail from Bristol in August of 1752, bound for the Gold Coast of Africa to take on a cargo of slaves. Through his truncated entries in his log, Hamilton emerges as an intelligent merchant and competent seaman, stern but fair with his crew and aware at a visceral level of the inconsistency between his Christian beliefs and the inhumanity of the trade that he has inherited from his recently deceased father. Yet, he goes about the business of dealing in human bondage with what is referred to as "commercial detachment" from the misery to which he is contributing. The prevailing attitude is that business is business. Cargo is cargo, and while gentlemen must deal with their colleagues and peers ethically and morally, such niceties do not extend to cargo.

Phillips paints a picture of the Gold Coast slave trade as something that is no particular group's fault. Ultimately, the original sellers of slaves are black men, though there may be white intermediaries between the various points of sale. It is not a racial or moral issue; it is business. Hamilton's more-refined nature emerges in two adolescent letters to his bride back in England, extolling her purity and pledging his undying fidelity. He sees the horrors he encounters in the slave business as enabling the idyllic and genteel future he sees for his wife, himself and the proper English family they will produce. In his mind, that noble end seems to justify the barbaric means.

Hamilton is haunted by the mysterious circumstances surrounding his father's death on his final voyage to Africa. A trader named Ellis knows the secret, but he will not reveal the details. He states, however, that no man associated with James's father should call himself a Christian. James knows that his father battled with the dichotomy of trying to maintain Christian beliefs while dealing in slaves, and the implication is that the conflict drove him mad.

"Somewhere in England" is the final independent work within the novel Crossing the River. The action takes place between 1936 and 1945, with a brief interlude looking forward to 1963 at the end. The novella-length piece is presented in a journal or diary form in the voice of Joyce, a young woman during the years leading up to and through World War II. Consistent with the title, the small town and smaller village from which Joyce observes wartime England remain unnamed. Joyce is not a happy 1ass, continually nagged by her neurotic mother who has never gotten over the death of her military husband in the First World War and has taken refuge in religious zealotry. Joyce marries a shopkeeper named Len from a small village near the town where she lives with her mother. Len is a bit of a dolt, and Joyce knows almost immediately that the marriage is a mistake, following as it does on the heels of an earlier romance-gone-bad that ended in an abortion.

Len eventually goes to prison for dealing in the black market during the war, leaving Joyce to run the village shop. The U.S. Army stations a detachment of black soldiers near the village where Joyce lives, and she falls in love with one of the officers named Travis. She becomes pregnant by Travis just before he is shipped off to Italy. He is able to return on leave to marry Joyce - whose divorce from Len is finally settled - just days before the birth of their baby, Greer. Travis is killed in Italy, and Joyce is forced to give Greer up to the county as a war orphan. The only time she sees him again is in 1963, when he comes as a young man to visit her in a new life. Joyce secretly continues to love Travis, even in her new life, and she is portrayed as a good person, caught up in bigotry and circumstances beyond her control.