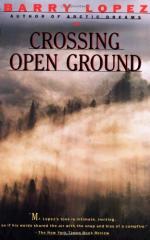 In this collection of essays, noted writer, traveler, and environmental activist Barry Lopez travels to remote regions of North America to explore the interaction between humanity and nature. Common themes in these essays include the humanity's relationship with nature and the relationship between landscape and the human experience.

In the collection's first essay, Lopez travels to the remote, Southern California location of the portrait of a horse, shaped in stone. In the changing early morning light, Lopez sees different lifelike aspects of the horse, and begins a collection-long contemplation of what evidence of human effect on nature means about the relationship between humanity and nature in general, and about the ancient peoples of an area in particular.

In the essays that follow, the author visits the wintering ground of shrinking flocks of migrating snow geese and travels the Grand Canyon in the company of a group of musicians. In both cases, the thematic focus of the essays is on the relationship between humanity in nature. In the case of the former, Barry examines the destructive effect of both hunting and industry and in the case of the latter, he considers the effect of human connection with landscape on creativity. In the essay "Landscape and Narrative," the author explores this theme further, specifically in terms of how landscape shapes and defines storytelling and narrative.

In the next two essays, the author comments on his experiences traveling into the northern wilderness (Alaska and the Yukon) of North America, where he examines the concept and practice of creating borders, both natural and defined by humanity. Then in the subsequent two essays, the author portrays several aspects of the relationship between humanity and animals. In one, he explores the somewhat exploitive relationship between humanity and rodeo animals, while in another, exploring the variety of relationships (sympathetic, exploitive, and scientific) that develop with both brevity and intensity when a large pod of sperm whales becomes stranded on a beach in Oregon. Considerations of the moral value of scientific research on animals continues in "The Lives of Seals," in which the author accompanies a team of research scientists on an investigation of the possible effects of oil exploration on seals on the west coast of North America.

In the final three essays of the collection, the author explores historical aspects of the relationship between humanity and nature. In one essay, he makes his exploration personal, as he reflects on how three youthful relationships with older mentor figures gave him an increased appreciation of nature, while in another, he narrates and explores the ways in which humanity has destroyed and manipulated nature to serve its own need for power, control and status. In this particular essay, also the final one of the collection, however, he turns the destructiveness of the central image around, and uses it as the basis of commentary on how nature has survived, and will continue to survive, in the face of human encroachment and destruction.