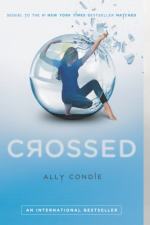 Ally Condie
This Study Guide consists of approximately 25 pages of chapter summaries, quotes, character analysis, themes, and more - everything you need to sharpen your knowledge of Crossed (Matched).

Crossed is the second novel in the Matched series by Ally Condie. In this novel, Cassia has been in work camps hoping to find a chance to go to the Outer Provinces so she can find Ky. When the chance finally arrives, Cassia learns that she has missed Ky by just a few days. Cassia follows Ky into a group of canyons called the Carving. Eventually Ky and Cassia reunite, but their happiness is spoiled by Cassia’s determination to join the Rising and Ky’s determination to avoid the Rising at all cost. Crossed is a dystopian novel that questions the bindings of true love in the face of adversity.

Ky is stuck in the Outer Provinces where the Society is using him and other Aberrations like him as decoys in the fight against an unseen enemy. Ky spends most of his days burying the dead and his nights trying to stay alive. At the same time, Cassia is in the work camps hoping to find an opportunity to escape into the Outer Provinces and find Ky. As she reaches the end of her time in the camps, Cassia receives a visit from her match, Xander. Xander helps Cassia get information she needs to find Ky, but also expresses unhappiness in her decision to abandon him to search for Ky.

When Ky is taken to a village near where his family lived years ago, he decides that he must run away. Ky takes with him Vick, a young boy about his age from a military base, and Eli, a young boy who reminds Ky of Cassia’s younger brother. Together they escape into the Carving, a set of canyons where Ky’s father once traded with a group of rebels called farmers. At the same time, Cassia manages to get onto a transport to the Outer Provinces with her bunkmate, Indie. When they arrive at the village, however, they learn that Ky has already run away. A boy who knew Ky agrees to show them where he went.

For days Cassia and Indie walk in the canyons hoping to find some sign of Ky. When their food runs out, Cassia takes a blue pill that Xander gave her and told her would provide her with nutrition until food can be found. The pill turns out to be poison, however, and Cassia begins to hallucinate as she and Indie walk. At the same time, Ky and his group have found the farmers’ village, but it is abandoned. They take supplies and souvenirs before moving on. At a small river Vick catches fish for them. The following day, Vick is killed when the Society drops poison discs into the river from aircraft.

After spending a day burying Vick, Ky and Eli are preparing to move on when Indie and Cassia catch up to them. The larger group decides to return to the farmers’ village in order to search for information on the Rising. In the village, Ky and the others discover that one of the farmers stayed behind to care for his dying child. After the child dies, the group approaches the farmer to ask for information. The farmer agrees if they will first explain to him what is stored inside a canyon guarded by a society wall. They climb into another canyon and enter the cave. Cassia immediately recognizes the objects there as tissue samples the Society has gathered to regenerate appropriate Society members.

An alarm goes off, so Ky, Cassia, Indie, and Eli flee the cave while the farmer stays behind to break the vials. Back in the farmers’ village, Ky and his friends search for information in the papers stored in a cave. Indie finds a map to the Rising, but Ky attempts to burn it to keep Cassia from seeing it. Ky is afraid of the Rising and does not want Cassia to go there. However, Cassia stops the map from burning and insists on going. When they reach the river, Ky makes the decision to go to the Rising in order to be with Cassia. However, when Cassia and Indie reach the Rising by boat, Cassia is immediately sent back to the Society to act as a spy. Ky is made a pilot.

More summaries and resources for teaching or studying Crossed (Matched).