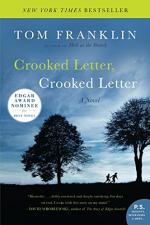 Tom Franklin
This Study Guide consists of approximately 53 pages of chapter summaries, quotes, character analysis, themes, and more - everything you need to sharpen your knowledge of Crooked Letter, Crooked Letter.

The novel, set in the Southern United States, begins with an attack: specifically, the attack of a masked intruder on white mechanic Larry Ott, long suspected of the murder of one teenaged young woman and more recently suspected of the disappearance and possible murder of another. Meanwhile, black police constable Silas Jones discovers another murder victim and participates in the investigation into the man’s death, the whole while experiencing an intuition that Larry, whom narration reveals is an old friend, is in trouble. When he learns that Larry has been shot and seriously injured, Silas begins an informal investigation into that crime as well, both investigations leading him and the reader into a series of encounters with the past.

Alternating chapters, recounting present and past events from the points of view of Larry and Silas, reveal that Larry was the last person to see teenaged Cindy Walker alive; that no evidence was ever found to conclusively link her to what was generally believed to be her death; and that in the years since Cindy disappeared, Larry has been ostracized by virtually everyone in the town of Chabot Mississippi, where he grew up and continues to make his home, and where he is the prime suspect in the recent disappearance of Tina Rutherford, a member of the wealthiest family in the area. Narration in both past and present also reveals that Larry and Silas were close when they were children, but the mean-spirited intervention of Larry’s sadistic father Carl drove them into a confrontation that resulted in Larry shouting a racial epithet, something for which Silas could never forgive him. Finally, narration reveals that shortly after Cindy disappeared, Silas went away to complete his schooling, while Larry stayed in Chabot.

In the present, Larry survives the shooting but remains in a coma. Silas takes care of Larry’s home and livestock and continues to investigate what happened, discovering evidence that other investigators miss. He also investigates the placement of a poisonous snake in the mailbox of a young woman from the poorer part of town, and has an encounter on the road with a law-breaking young man who introduces himself as Wallace Stringfellow.

Eventually, narration reveals several layers of truth in the various mysteries. First is the fact that Larry developed an odd sort of friendship with Stringfellow, who was strangely obsessed with the idea that Larry might be a killer. Second: Silas confesses to his girlfriend that he was with Cindy Walker on the night she died, their interracial relationship having to be kept secret from the community; and that he didn’t speak up about it, thereby making it clear that Larry was innocent, because as Silas’ mother once said, something was “missing” in him. Third: a search through Larry’s family home provides evidence to Silas that Carl was both his and Larry’s father. And finally, various pieces of evidence come together to make both Silas and Larry conclude, independently of each other, that Stringfellow was involved in the disappearance of Tina Rutherford (whose body is found by Silas) and that Cindy Walker’s immoral step-father was probably responsible for her disappearance (her body was never found).

A confrontation between Silas and Stringfellow results in the latter’s death and the former being placed in a hospital, where he is put in the same room as Larry. Silas confesses to Larry what he has found out about their shared parentage, and Larry (now off the hook for both murders, since Silas has also revealed to the police the truth about his relationship with Cindy) realizes just how much he has been betrayed. Silas, however, begins the process of making amends, and Larry begins to re-awaken to the value of their friendship.