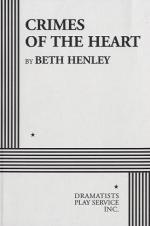 Crimes of the Heart was adapted as a film in 1986, directed by Bruce Beresford and starring Diane Keaton, Jessica Lange, Sissy Spacek, and Sam Shepard. The film adds as fully-realized characters several people who are only discussed in the play: Old Granddaddy, Zackery and Willie Jay. The film received decidedly mixed reviews but also garnered three Academy Award nominations, for Henley's screenplay and for the acting of Spacek and Tess Harper, who played the catty Chick.

In a rare example of reverse adaptation from drama to fiction, Claudia Reilly published in 1986 a novel, Crimes of the Heart, based on Henley's play.