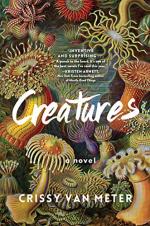 Crissy Van Meter
This Study Guide consists of approximately 38 pages of chapter summaries, quotes, character analysis, themes, and more - everything you need to sharpen your knowledge of Creatures.

The following edition of this novel was used to create this study guide: Van Meter, Crissy. Creatures. Algonquin Books, 2020. Hardcover.

The novel’s first-person narrator, Evie, wakes up a few days before her wedding on her home on Winter Island, off the coast of California. She notices a dead whale that has been beached from her house. Her fiancé, Liam is working aboard a long-haul fishing ship, and his whereabouts are unknown due to inclement weather. Evie’s mother suddenly appears at her house: Evie and her mother have a strained relationship, as her mother had left Evie and her dad early in Evie’s childhood.

Evie recall moments from her childhood spent with her dad, who was a wild-partying and unreliable personality, leading to tremendous instability throughout Evie’s childhood. Evie recalls how her dad had briefly seen a woman named Mary, who had a warm and comforting home. However, Evie’s dad is not ready to commit to a woman other than Evie’s mother, and Evie and her father move onto a houseboat instead. When their houseboat sinks in a storm, the pair must couch-surf among friends, before being given enough money by Mary for an apartment. As Evie grows older, her dad enlists her in selling potent marijuana that he grows with his friends on a remote corner of the island, a strain called Winter Wonderland. As a teenager, Evie also begins an unlikely friendship with a popular and attractive girl named Rook. Rook helps Evie sleep with one of her father’s friends, nicknamed Bunny, on Evie’s 16th birthday.

In the present moment, before Evie’s wedding, Evie and her mother go run errands around the island while passive-aggressively communicating with one another. A series of chapters then flashes forward, showing Evie and Liam at a point ten years into their marriage. It is clear that, despite Liam’s positive nature, Evie is unable to positively relate to him, due to the emotional scars of her childhood. Evie also struggles with the terms of their open marriage, which she had agreed to. After Liam returns from a long-haul fishing trip one day, Evie learns that he has agreed to close their open marriage, and Evie later learns that he had written her a romantic letter every day, which have piled up in her post office box. Evie realizes that she no longer wants Liam to constantly be traveling on the long-haul journeys.

The narration returns to the days just before Evie’s wedding. She goes out on the town with her mother, who promptly acts as the ringleader for a group of divorcees at a bar. Evie kisses the drummer of the bar band on the roof of the bar.

Evie recalls, in high school, how Rook had a beloved hot tub at her family’s house, which Evie personally despised. Evie discovers some of her father’s personal items in Rook’s bedroom drawer, and confronts Rook about their affair. Evie journeys to the San Bernardino mountains on the mainland and finds her mother, who is working as a waitress at a rural restaurant, but is unable to get the advice she wants from her.

Evie eventually begins to work at The Ocean Institute on the mainland on the advice of her mother, and begins to see many phenomena in oceanography as extended metaphors for her own life. However, Evie’s mother quickly leaves the Institute to move across the country, and Evie continues to study there on her own. Evie’s father passes away while working on a fishing boat, slipping while drunk and sustaining massive head injuries. The narration reveals that Tommy, Rook’s young son, is also the son of Evie’s father. Evie nonetheless cares for Tommy as if she is his mother.

On the next day of Evie’s mother’s visit, they get the news that all of the fishing boats, including the one Liam is on, is safe but delayed, postponing Evie’s wedding. The next morning, Evie and her mother wake up early as use Evie’ motorboat to drag the carcass of the dead whale out to sea.

More summaries and resources for teaching or studying Creatures.