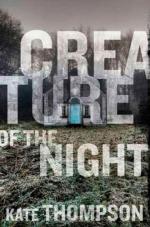 Kate Thompson (author)
This Study Guide consists of approximately 28 pages of chapter summaries, quotes, character analysis, themes, and more - everything you need to sharpen your knowledge of Creature of the Night.

Creature of the Night Summary & Study Guide includes comprehensive information and analysis to help you understand the book. This study guide contains the following sections:

This detailed literature summary also contains Topics for Discussion on Creature of the Night by Kate Thompson (author).

Robert, or Bobby, is a fourteen-year-old Irish youth living with his unmarried mother and his brother Dennis, who is four-years-old. The family relocates from Dublin to a small rural area on the outskirts of Ennis in County Clare. Robert's mother moves for two primary reasons—she wants to get Robert away from his criminal gang, and in turn she hopes to elude numerous debt collectors who pester her for money. The family moves into a small house on the property of PJ and Margaret Dooley and they pay the deposit and first rent with borrowed money. Robert's mother does not work and lives on the dole, or public funds, supplemented with whatever she can borrow from anyone. Robert immediately decides he hates the country and plans to return to Dublin to spend more time with his friends pursuing criminal endeavors and having fun. Over the course of the next two weeks, Robert does manage to get himself back to Dublin a few times. On every trip he gets into criminal mischief and uses drugs and alcohol. On his first return he steals an automobile and subsequently is involved in a crash. When the police pick him up he rats out his older friend, Mick, and Mick is sent to prison while Robert is returned home. On subsequent trips Robert realizes that his remaining friends want nothing more to do with him because they feel he no longer is reliable in a pinch because he didn't remain silent with the police. Meanwhile, during his time near Ennis, Robert is befriended by Coleman Dooley, the son of PJ and Margaret. Coleman is a good humored and hard-working and teaches Robert about farm life, work, and morality.

As time passes, Dennis becomes obsessed with an imaginary nocturnal visitor and often leaves the rented house through the dog flap on the door. Robert and his mother also learn the previous tenant, Lars, has gone missing. They also hear many rumors about the house being haunted by fairies. Robert eventually discovers that Lars has not simply left but has been murdered. Robert's mother also realizes about this time that the bill collectors eventually will track her down—they already are pestering his sister Carmel in Dublin. Refusing to live in a 'haunted' house, Robert's mother moves the family back to Dublin where they stay with the disgruntled Carmel and her eighteen-year-old son Luke. Luke, previously one of Robert's closest friends, now rejects him completely for turning on Mick. Carmel demands that Robert must leave because she, too, does not trust him. Robert realizes that his meager savings will not secure housing and finally blows all his money on a drug binge with the Beetle, last person who will talk with him. Finally realizing he has no future, Robert leaves Dublin and returns to Ennis where he asks the estranged Dooley family to give him a second chance as a hired hand.

More summaries and resources for teaching or studying Creature of the Night.

Creature of the Night from BookRags. (c)2022 BookRags, Inc. All rights reserved.