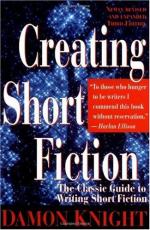 Damon Knight
This Study Guide consists of approximately 25 pages of chapter summaries, quotes, character analysis, themes, and more - everything you need to sharpen your knowledge of Creating Short Fiction.

Part 1, Developing Your Talent as A Writer Summary and Analysis

Every successful writer has his own method in developing his story. One developed his story in a dark trailer with black-painted windows. Another took a four-hour bus ride to anywhere, turned around and rode back home. When he arrived, he had his story.

Four Stages of A Writer's Development

The four states of a developing writer are: Stage 1 - The writer is writing for himself—a narcissistic daydream that would not communicate logically to anyone else; Stage 2 - The story becomes "trivial" with half-formed ideas; Stage 3 - The writer begins creating a complete story but has serious weaknesses in structure or character; Stage 4 - The writer corrects his weaknesses and eventually evolves into a professional writer.

Getting Out of Stage 1

The writer needs to take...

(read more from the Part 1, Developing Your Talent as A Writer Summary)