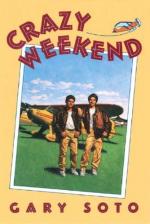 Gary Soto
This Study Guide consists of approximately 25 pages of chapter summaries, quotes, character analysis, themes, and more - everything you need to sharpen your knowledge of Crazy Weekend.

This detailed literature summary also contains Topics for Discussion and a Free Quiz on Crazy Weekend: A Novel by Gary Soto.

Crazy Weekend by Gary Soto focuses on two seventh grade boys, Hector and Mando, from East Los Angeles. They travel to visit Hector's Uncle Julio in Fresno and become eyewitnesses to a robbery. When the robbers come after them, the boys must defend themselves.

Hector Beltran and Mando Tafolla are two best friends from East Los Angeles. They are in the seventh grade. They travel to Fresno, California to see Hector's Uncle Julio. They immediately go to work with Julio, who is a photographer. They go to a small airport. They fly in a small plane because Julio is hired by the Inouye farm to take photos of the farm. Hector and Mando are terrified of flying in the small plane. Up in the air, they spot a truck on fire and Julio takes photos of it because it may be news.

Back in Julio's car, they hear on the radio there has been an armed robbery around Central Avenue. The drivers have been bound and gagged. Fifty-thousand dollars has been stolen. The drivers cannot identify the robbers. Julio and Hector realize the truck on fire photos are of this robbery. They develop the photos at home and see the license plate of the robbers' car. Julio calls up The Fresno Bee, a local newspaper with which he has been trying to get a job. They go to the newspaper's headquarters and Julio gets $300 for the photos. Vicky Moreno, a beautiful reporter, interviews Hector and Mando for the Today's Youth column. They tell her all about the robbers' car and license plate. Uncle Julio likes Vicky.

The next morning, the column comes out. Julio realizes the robbers will come after them. Meanwhile, Freddie Bork and Huey "Crybaby" Walker, the two robbers, plot their revenge against Julio and the boys. Freddie and Huey run Julio and the boys off the road, damaging Julio's car. That night, Julio, Hector and Mando go to dinner with Vicky, who feels terrible because the column had been scheduled to run after the robbers had been apprehended. Julio drops the boys off at his apartment while he goes to Vicky's house. Julio says not to open the door.

Freddie and Huey show up and try to get in Julio's apartment. Hector and Mando throw water, marbles and bowling balls at them. Finally, they barricade themselves in a dark room. When Freddie and Huey enter, Hector takes a photo and the flash blinds the robbers. Hector and Mando punch and kick Freddie and Huey and tie them up. Julio comes home and calls 911. The police come and take the robbers away. Vicky comes over. The four of them discuss where to go on vacation with the $5000 reward. Julio and Vicky hold hands.

More summaries and resources for teaching or studying Crazy Weekend: A Novel.