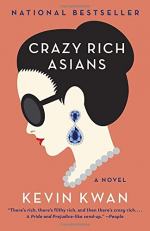 Kevin Kwan
This Study Guide consists of approximately 104 pages of chapter summaries, quotes, character analysis, themes, and more - everything you need to sharpen your knowledge of Crazy Rich Asians.

The following version of this book was used to create the guide: Kwan, Kevin. Crazy Rich Asians. Anchor Books, 2013.

Rachel Chu, a 28-year-old Economics professor at New York University, has been happily dating Nick Young, a 32-year-old History professor at NYU, for the past two years. One day, Nick tells her that his childhood best friend, Colin Khoo, is getting married over the summer. Nick plans on flying back home to Singapore for the wedding and wants Rachel to accompany him. Skeptical about being away from New York for so long—and curious as to whether or not an international trip means something more serious for her relationship with Nick—Rachel is apprehensive but ultimately agrees. As an economist, Rachel knows Singapore has one of the highest concentrations of wealth in the world, and she is excited to see the island up close with Nick as her guide. Plus, she would like to visit her best friend from college, Peik, who lives in Singapore. However, Rachel knows next-to-nothing about Nick’s family and is nervous about what to expect. As Rachel fishes for details about them, Nick clams up.

Nick does not know how to begin to explain his mysterious, powerful family and his opulent life in Singapore to Rachel, since it is so far removed from their frugal lives as professors in New York. He turns to his cousin and close confidant, Astrid, for advice, and she warns him several times to prepare Rachel for the culture shock that awaits her in Singapore. Ultimately, Nick chooses not to heed to Astrid’s advice and defiantly thinks that he should be able to bring his girlfriend home with him without it being a big deal.

Before Rachel and Nick even leave for Asia, gossip swirls amidst the Singaporean upper crust. Rumor has it that Nicholas Young has a new girlfriend and is bringing her home to Singapore with him for the wedding of the year, between ultra-wealthy Colin Khoo and supermodel Araminta Lee. Some people say Nick’s new girlfriend is just a no-name American-born Chinese girl, while others say she is a Taiwanese socialite. No matter the case, Nick’s mother, Eleanor Young, is not pleased. As the potential heir to a massive fortune—and a member of one of most mysterious, wealthy, and powerful families in Asia—Nick should only be dating women in their social circle. That is, he should absolutely not be dating some unheard-of woman from New York. Despite knowing nothing about Rachel, Eleanor is certain Nick’s girlfriend is a gold digger after Nick’s fortune. Eleanor decides to take matters into her own hands, hiring a private investigator to conduct a full background check on Rachel and her family and enlisting her best friends and their daughters to help sabotage her son’s relationship.

Meanwhile, Nick’s cousin Astrid is dealing with relationship problems of her own. Her husband, Michael, has been traveling constantly and working long hours for his struggling startup. It is only when Astrid discovers an anonymous, dirty text message on Michael’s phone that she grows suspicious that he is cheating on her. The clues begin piling up, like the receipt in Michael’s wallet for an extraordinarily expensive dinner at a French restaurant in Hong Kong, or the bracelet that Astrid’s personal jeweler sold to Michael months ago that Michael never gave to Astrid. Eventually, Astrid hears rumors that Michael was spotted in Hong Kong with another woman and a child, which confirms her suspicions. When she confronts Michael about his infidelity, he admits to having a mistress in Hong Kong and hastily moves out, despite Astrid’s pleas that they work on fixing their relationship. Later, with help from her ex-fiancé (and now friend), Charlie Wu, Astrid tracks down Michael in Hong Kong at his mistress’ apartment to confront him again and find closure. Michael breaks down and admits that there was no mistress and that he never cheated on Astrid. His female cousin was posing as such to make it seem like Michael was cheating on Astrid. Michael confesses that he never wanted to actually marry Astrid, that he hates her family, and that he has grown increasingly unhappy over the past five years. He thought that if he looked like he was cheating on Astrid, she would find out and would want to leave him. He begs Astrid to let him go and move on, which breaks Astrid’s heart.

Once Rachel and Nick arrive in Singapore, Rachel is immediately faced with confusing cultural differences, snide remarks, and most of all, the shocking discovery that her history-professor boyfriend also happens to be one of the wealthiest and most sought-after men in all of Singapore. Eleanor and her friends perpetuate the rumor that Rachel is a gold digger, as they try to turn the island against her while making several attempts to break Rachel and Nick up. Most notably, Eleanor enlists Francesca, her best friend’s daughter, to take the lead on sabotaging the relationship. Francesca leaves Rachel threatening notes, tries to make her jealous, and humiliates her in public. Eventually the truth spills out, as Rachel relays to Nick every cruel word and action she endured over their trip. Nick is horrified and shocked at how vicious his family and friends can be, especially to someone he loves.

Rachel wants to return to New York immediately, but Nick convinces her to stay a few more days so that they can go on a road trip together and escape from all of the people who mistreated Rachel. The next morning, they leave for Malay to spend a few days at Su Yi’s summer lodge. Nick has already decided to ask Rachel to marry him once they arrive at the lodge—seeing her in the crowd at Colin’s wedding reaffirmed to him that he wants to spend the rest of his life with Rachel. However, when Rachel and Nick arrive at the lodge, Nick’s plans are shattered, as they find Eleanor and Su Yi waiting for them. In front of both Nick and Rachel, Eleanor and Su Yi blatantly say that Nick is not allowed to marry Rachel, as she is from an improper background. Eleanor divulges that Rachel’s father did not die in a construction accident—he is alive and in jail in Shenzhen, while Rachel’s mother, Kerry, is wanted for kidnapping charges. Reeling from the shocking news and Eleanor and Su Yi’s cruelty, Nick and Rachel leave the lodge immediately. Rachel begs Nick to give her time alone to process all that she has heard, so he drops her off at a nearby lodge for the night. Once he leaves, she takes a taxi to Peik Lin’s house, where she then hides out for several days, ignoring Nick and still reeling from the pain and shock. While at the Goh’s house, Rachel decides that she needs to go to China to meet her father and is adamant that Peik, not Nick, accompany her. The Gohs talk Rachel into at least seeing Nick face-to-face once before the trip. Rachel obliges but uses the opportunity to break up with Nick and get away from all the pain and cruelty she has experienced in Singapore. In his heartbreak, Nick spends several days wasting away at Colin’s house while Colin is away on his honeymoon. Worried about Nick, Colin comes back early and convinces Nick to go after Rachel again, even if it seems impossible.

On the day Peik and Rachel are meant to leave for Shenzhen, they find their driveway blocked by an SUV. Nick hops out, followed by Kerry, fresh off of the plane from Cupertino. Surprised and angry to see both Nick and her mother, Rachel tries to leave for Shenzhen anyways. Kerry begs her daughter to not go to China and launches into the story she has been carefully hiding for twenty-nine years. Kerry reveals that long ago, she was living in China, married to an abusive alcoholic. She was able to cope with the abuse for a short while with help from an eighteen-year-old neighbor boy, whom Kerry began having an affair with. Eventually, Kerry became pregnant, and Kerry knew the child belonged to the neighbor, not her husband. Luckily, no one suspected Kerry of infidelity. Soon, Kerry gave birth to a baby girl, but her husband’s family, wanting an heir, were furious and plotted to harm the baby. With help from the neighbor boy, Kerry ran away with her infant daughter and eventually made it to America to start their lives over.

When Kerry finishes her story, Rachel is appalled at her mother’s dark past. Realizing that the man in jail is not her father but is the man who made Kerry’s life miserable, Rachel is glad Kerry stopped her from going to China. Rachel and Kerry patch up their relationship, and Kerry reaffirms how much she likes Nick and thinks Rachel should give him a second chance. Rachel obliges and steals off to have a moment alone with Nick. The two forgive one another wholeheartedly, and the novel closes as everyone bickers playfully about where to go for a meal.